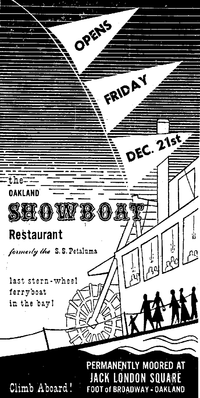 The Showboat was two different floating restaurants at Jack London Square on two different ships, first from 1951 until 1956, and then 1959 to 1971.

The first restaurant was in a converted sternwheeler. It burned in 1956. 5,7

The second restaurant was in a converted ferryboat with fake sidewheels, and was moved to JLS from Stockton in 1959. It was closed for about 6 months in early 1966 for a $50,000 remodel. 6 In 1971, the ship was moved to Burlingame because there were so many restaurants in JLS. 1 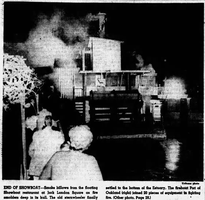 Oakland Tribune photo of fire 7The first ship was the Petaluma, a sternwheeler built in 1915 in Benicia to carry eggs from Petaluma to San Francisco. In 1947, it was stuck on a piling in the Petaluma River and sank. She sat on the bottom for two weeks before being refloated. 8

The Petaluma was the last sternwheeler on the bay, and made her last run in 1951 then was converted into a floating restaurant. 7 It opened on December 21, 1951. 9

On the night of October 13, 1956, a dishwasher was below decks to get vegetables and discovered a fire. The patrons and staff were evacuated and the fire department battled the blaze. The fireboat Port of Oakland joined 20 other pieces of equipment, but they were unable to extinguish the fire. The boat started sinking suddenly, and 4 firefighters were forced to jump into the estuary. The remains of the ship settled to the bottom. 7

It turned out that dishwasher Tom Doerner who had "discovered" the fire was an arsonist and was the one who had set it. He was committed to a state hospital in 1957. 13 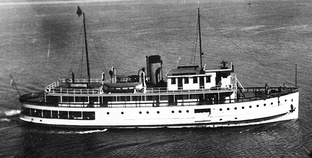 USAT Coxe c.1935, public domain 3Wikipedia and a column in the San Mateo Times say the ship was built in 1922, by the Charles Ward Engineering Works of Charleston, West Virginia. 1 The ship was the USAT General Frank M. Coxe, a ship for transporting U.S. Army personnel around San Francisco Bay. After WWII it was used as a tour boat by the predecessor of the Red and White Fleet. 3

It opened in Stockton on July 1, 1955, as the Showboat Restaurant & Wheelhouse Lounge. After a disagreement between the owners the ship was sold, and it was moved to Jack London Square in 1959. 4

The owners decided there were too many restaurants in Jack London Square, and in early 1971 the ship was moved across the bay. At some point after moving to Burlingame, The Showboat became the Lucky Lady with after-hours entertainment, but in 1977 ran afoul of the law. 2 It also operated as a Thai restaurant, Pattaya Princess. 3 In 2014, it was moved back to Stockton. 4

For a brief period between the two Showboat restaurants, the former ferryboat Charles Van Damme served as the Paddle Wheel Restaurant. It opened in December 1957, 10,11 but by December 1958 the operators closed it, and in February 1959 they declared bankruptcy. 12 The Van Damme was built in 1916 and served on various routes around the Bay until 1955. After closing as the Paddle Wheel, it was towed back to Sausalito. 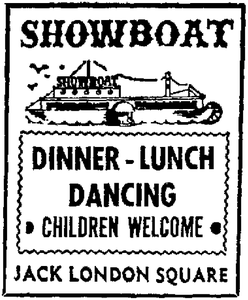