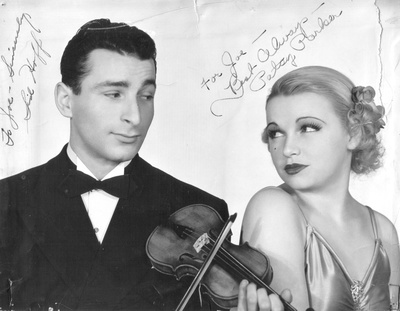 publicity photo, signed by Sid Hoff and Patsy Parker
from the collection of Our OaklandSid Hoff (August 25, 1913 – September 23, 2002) was the leader of "Sid Hoff and His Orchestra," the house band at the Ali Baba Ballroom. His obituary says he owned the ballroom. 2

Hoff was born Sidney Hoffenberg in New York, and grew up in Oakland with music part of his life. At age 16 he played violin with the San Francisco Symphony.

"His Orchestra" was usually 10 or 11 musicians, but sometimes as many as 20. 1 They were the house band at the Ali Baba, but also played at the Sands Ballroom in Oakland. During the summer, they sometimes played at the old Camp Curry Ballroom in Yosemite National Park.

The orchestra was sometimes accompanied by different vocalists and even a comedian, including:

Shows with the orchestra were simulcast live from the Ali Baba on KMPX-FM, and El Patio Room in San Francisco on KFRC. 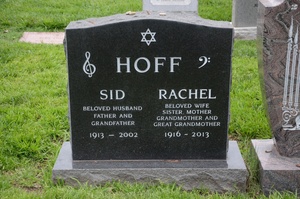 CC SA-BY Our Oakland
Hoff died in 2002 at the age of 85, and is buried in the Home of Eternity Cemetery.