Many sidewalks in Oakland are stamped with information about when and by whom they were made. By looking at a variety of sidewalk stamps in an area, you can sometimes get an idea of the age of the houses in that area, or at least the age of the sidewalks. In general, the oldest dates on a block's sidewalks correspond to the ages of the first set of homes on that block. Newer homes and newer sidewalks generally reflect losses of earlier structures due to fire, decay, shoddy construction, upgrades, lot consolidation and other changes.

Paved sidewalks date from the 1880s, when the development of Portland cement made concrete widely available. To attract buyers of home lots, developers would lay out whole blocks and install sewerage, gas and electric and water lines, plus concrete curbs and sidewalks. (Streets themselves were generally macadam, or graded gravel topped with crushed stone, rather than concrete.)

There are dated stamps in Oakland as old as 1901, and a small number of paving companies use them today. The largest number of sidewalk makers using stamps was in the 1930s, and smaller waves of diversity occurred in the 1910s, 1920s and 1950s, coinciding with surges in residential construction. The oldest surviving firms that have left sidewalk stamps in Oakland are the Ransome Construction Company (1904), J. H. Fitzmaurice (1926) and O. C. Jones (1929), although they no longer use sidewalk stamps today.

It is an urban legend that companies stopped stamping their work to avoid liability. Various changes in development and construction practices are more plausible factors in the long-term decline of these marks.

Some sidewalk stamps from around Oakland. Photos CC SA-BY Our Oakland: 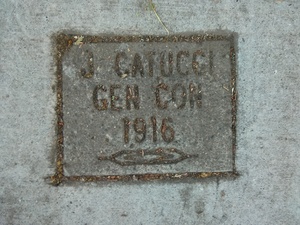 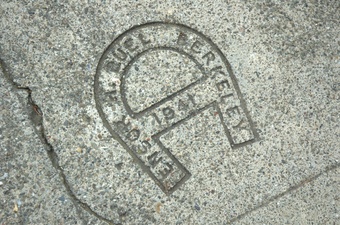 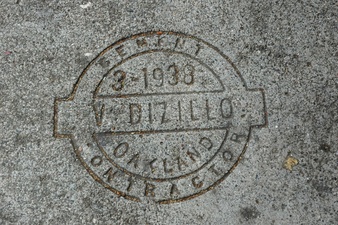