Sidney Allan (Algenon) Dearing (March 8, 1870 – October 6, 1953) was born in Fredericksburg, Texas. He married Irène F. Davis (Davies) from Canada November 30, 1920 in Oakland. He was 45 years old the day of his second marriage after being a widow from his first and had at least three kids. He became the proprietor of the Creole Café until it was closed by the federal authorities due to alcohol being served.

From the book "No There There: Race, Class, and Political Community in Oakland" By Chris Rhomberg, pp 55:

In Piedmont, a wealthy suburban enclave in the Oakland hills, police refused to provide protection for Sidney Dearing, the only black homeowner in town. When Dearing chose not to move, the city began condemnation proceedings against his property in order to force him out.

Oakland Tribune Jun 7, 1924, Sidney Dearing's house at 67 Wildwood in Piedmont was bombed three times. Burton Becker, whose Klan title was Kailiff (vice president), served as the police chief of the city of Piedmont before being elected sheriff of Alameda County in 1926 and later sent to San Quentin.

His mother in law bought the house for $10,000 and he asked the city to buy it back from him for $25,000—and the city of Piedmont eventually did. In the end the two houses in the way were never demolished and a nearby walkway between the block (a few houses down) remains as a reminder of this block’s segregated history. More info here.

In 2022, the city of Piedmont began exploring ways to memorialize the Dearing family, including naming a city park in their memory. 1 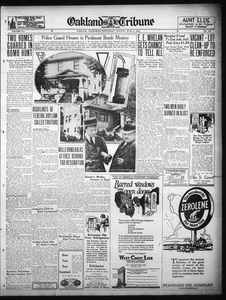