The Bradburys had homes in Northern and Southern California. Their favored home was at 959 - 12th St. / 1040 Filbert St. [ the 1887 directory lists 959 - 12th St.; newspapers, etc. list 1040 Filbert St. which would have been nearby depending on numbering changes. ] [Actually, it appears that the original house occupied the entire block between 10th, Filbert, 12th, and Myrtle Streets, and was previously owned by Wedderspoon, but Sanborn maps show that either the house was moved and turned around so it was at the corner of 12th and Filbert or a new house was constructed, but either way Mrs. Bradbury sold off most of that block before she died. Need to finish up that rabbit hole, but don't have time right now.] 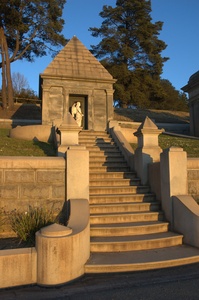 L.L. died July 15, 1892, and Simona took over running the business and was executor of his will. At the time of L.L.'s death, his estate was estimated to be worth $2.2 million, or about $100 million in 1990 terms. 4 Given the size of the estate, it's not surprising there was some squabbling over the distribution of it. 5

Simona was a devout Catholic, and purchased the plot on millionaire's row in 1894, and L.L.'s body was placed there the following year.

While Simona was in Los Angeles, she fell ill, and asked to be brought back to Oakland. She died December 10, 1902.

The Bradbury Family Papers 4 are at UC Davis, and include numerous photographs, diaries, and other items from multiple generations of the family.

The Bradburys are remembered outside of Oakland for several things. The city of Bradbury near Los Angeles was named for them, and is where part of their vast rancho was. The Bradbury Building in Los Angeles has a distinctive center courtyard with a glass atrium and open elevators. It has appeared in numerous TV shows, music videos, and movies, including Blade Runner. The building was made a National Historic Landmark in 1977. L.L. began construction of the building, but died before it was completed. Simona oversaw the completion of the building.