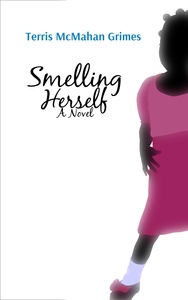 Set in 1964 West Oakland, Smelling Herself Smelling Herself  is told through the voice of Bernadine, a precocious eleven-year-old wordsmith. Being an African American girl and living in the West Oakland projects in 1964 can be a vulnerable and scary affair. Bernadine’s convinced that the solution to her predicament is to grow up, and that starts with growing “titties.” But the titties are taking their time, and she soon discovers that growing up is more complicated than she expected.

Though her community is loving—as is her mother and father—her environment is anything but child-friendly with kids getting shot by cops and others beating up their classmates in the tunnel that she has to pass through every day to and from school. Her precarious sense of well-being begins to unravel when Jessie Mae, a girl not much older than she, moves into the apartment above hers with her mother and “the Sheik,” her mother’s boyfriend, a door-to-door preacher who rapes and beats the child. Bernadine knows exactly what’s happening above her bedroom because she hears the cries of abuse as she tries to sleep at night. Fearless Bernadine makes it her mission to save Jessie Mae as though she’s saving herself and every other child who lives with constant threats, though the harder she tries to save Jessie Mae, the more her loved ones are put in danger.

Smelling Herself is imbued with Bernadine’s humor, intelligence, and kindred love, as Terris McMahan Grimes unflinchingly investigate—through the eyes of a quick-witted child—what it means to navigate dangerous times without fully understanding the world she lives in. It’s the story of childhood’s brazen hopes and hindrances.

Audio by Audible (read by author)

Terris McMahan Grimes is the author of two novels, Somebody  Else's Child and Blood Will Tell.   Both books won major awards including Anthony Awards for Mysteries and the Chester Himes Award for Black Mystery Writers. Terris grew up in West Oakland.