Here are news articles about the Society of Oakland Pioneers. Their collected reminiscences were published in a weekly article in the Oakland Tribune as Ye Olden Oakland Days during the 1920s.

The organization of a society of Oakland pioneers is being planned and a call will soon be made to all citizens who have lived here during the '50s and '60s, or prior to 1878. F. R. Porter is the organizer of the proposed society.

It is said that the society, when organized, will be composed of many of the wealthiest citizens of the city and plans for the erection of a memorial building to be constructed of adobe and along the lines of the Mission or old Spanish architecture, are being discussed. This building, if made possible, would contain early records of California, pictures, souvenirs and reminders of the early life of the men and women who made the civilization and claiming of the state possible. Horace Carpentier, who was the first mayor of Oakland, which was in 1854, is still alive, and resides in New York City. He is expected to visit Oakland during the coming summer and will be asked to join the society and aid in its becoming a reality. When Carpentier became mayor of Oakland there were not 600 people in the community, while, according to the latest statistics, the population is 185,000. 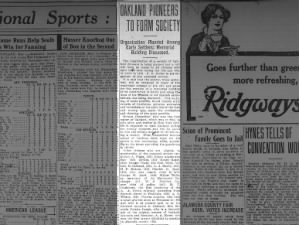 Pioneers of Oakland, one of whom arrived in this city in 1850, held a reunion last night in the city hall, where reminiscences of early days, before the advent of electricity and street cars, were recalled and plans for a permanent organization were formulated.

One of the younger members present came to this city as late of 1869. Some of those present had not seen each other for many years. Fred L. Button, a local attorney, who arrived in Oakland in 1863, presided at the meeting as temporary chairman. Charles G. Reed, a member of the '65 year, was temporary secretary.

For the purpose of permanent organization a committee of five was appointed to arrange the details, and a committee of three on membership was named. It was decided that every pioneer up to the year 1870 was eligible to membership in the organization. The next meeting will be held in the city hall February 6th.

At the meeting Charles G. Reed, the temporary secretary, discovered that two old school chums of forty-five years ago, attending the first public school in Oakland, had been living near him unknown all these years. A mock school was held with questions on back-history, such as "Who drove the first hack in Oakland?" 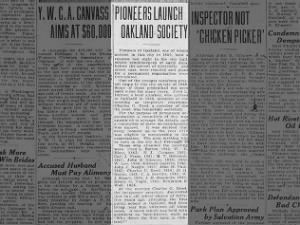 I have received an interesting communication from Fred L. Button of Oakland. It concerns the society of Oakland Pioneers, of which he is the president. Informing particulars regarding this organization are set forth in a circular. That the general knowledge regarding it is not universal may be due to the fact that it was organized as recently as a year ago. But it evidently has an appeal, for there is given a list of 103 members. I recognize many familiar names in this list -  those of former Governor George C. Pardee, Sheriff Frank Darner, Sigmund Beel, the violinist; Henry Blote of the Chronicle (there are three Blotes); Fred A. Campbell, Ed H. Hamilton, dean of newspaper men; Charles G. Reed, Judge E. C. Robinson, to mention a very few. Anybody who has lived in Oakland fifty years is eligible for membership, the costs of which are not onerous - one dollar admission fee and two dollars annual dues, and that the dues may not become burdensome they are made payable quarterly. The serious object of the society is stated to be to collect and preserve information relating to early settlers and the history of the city of Oakland. Meetings are held in one of the police court rooms in the city hall regularly on the second Friday evening of each month. The annual meeting was held last Friday, the 14th. It can be seen readily where such a society has a great field for usefulness in such a rapidly expanding community as Oakland, not to consider the social possibilities incident to renewing acquaintances and recounting former events and experiences. 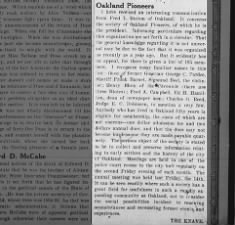