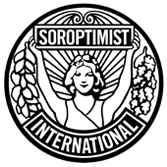 Soroptimist International is a "global volunteer movement working together to transform the lives of women and girls." It was started in Oakland in 1921 as the Soroptimist Association of Alameda County.

The first president was Violet Richardson Ward. 1 The club was started when Stuart Morrow was looking to start an Optimist Club. He stopped at the Parker Goddard Secretarial School and explained his purpose, and was surprised to learn the school was run by women. Adelaide E. Goddard commented, "When the men admit women as members of their service clubs, I would be interested." 2

The "First Meeting of Members" was held upstairs in the Venus Cafe on Tuesday, June 21, 1921. Attendees were: 2

(An earlier meeting was less successful; no one but Gladys Barndollar went on to be involved with the club.) After that regular club meetings were held at the Hotel Oakland.

One of the first projects the Soroptimists undertook was to save the redwoods (S.O.S. - Save Oakland's Sequoias). With efforts from those all over Oakland, and the support of Mayor John Davie, 3Sequoia Park and "The Hights" were eventually acquired, and are now part of Joaquin Miller Park.

The Soroptomists supported the Fenton Home Orphanage financially for many years.