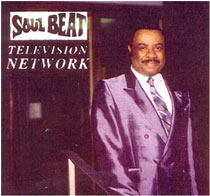 Johnson moved to Oakland in 1977 and started Soul Beat in 1978. Soul Beat Television was the very first music video network in the country, and broke all the major Oaktown artists, including Digital Underground, MC Hammer, and Too Short before they went mainstream. During Soul Beat’s heyday in the 80s through the mid-90s the Soul Beat Television Network was on KEMO Channel 20 in Oakland. Soul Beat later operated from Detroit's WGPR-TV and St. Kitts in the Caribbean. 1

Some commercials, including the classic "Beeper Man" and "Electron X":