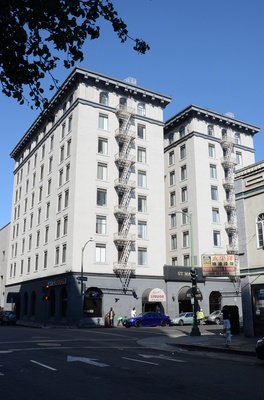 But there was some controversy about the design. Architect Frederick Soderberg filed a $1,000 lawsuit, and it went to trial in 1910 in the court of Judge Ogden. Soderberg said had been hired to design the building for 1% of the estimated cost, then wasn't paid. Mrs. Harriet Marks Samuel, owner of the St. Mark, said that Soderberg had copied the design from McDougall. 2

This is an eight story Beaux Arts stucco faced reinforced concrete hotel on a corner lot.  It has a one story base, plain six story shaft, and ornate one story capital with arched windows, pilasters, and modillion cornice.  Above the rectangular base, the plan is U-shaped around a one story skylit lobby, creating a pair of slender towers facing 12th Street.  Windows are paired at the end bays on Franklin Street, but elsewhere they are single.  The building has been renovated as 100 senior apartments.  Windows are now tinted glass casements in anodized aluminum sash.  The ground floor is faced with new brick in deep arches.  The lobby is largely intact, with coffered ceilings, Ionic columns and pilasters, hexagonal tile floor, and a large multi-paned rectangular skylight.

Benjamin Geer McDougall was one of California's leading early 20th century architects, who also designed the Federal Realty (Cathedral) Building at 1605-15 Broadway.  John B. Leonard, engineer for the St. Mark Hotel, was an early and innovative user of reinforced concrete construction.

In 1911 the St. Mark was described as "the largest and more prominent of the commercial hotels in Oakland,' having hosted President Taft in 1909.

Its height and Beaux Arts design relate it to the early commercial skyscrapers in the Downtown Oakland district.

This historic building is #35 on the list of District Contributors for the Downtown Oakland Historic District Registration Form. 1