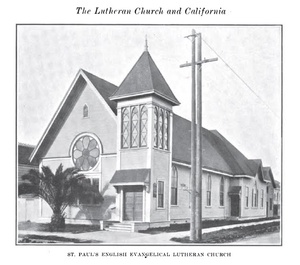 After moving to Oakland, Severin Anderson became a staunch supporter of Rev. I. L. P. Dietrichson in his efforts to establish a Scandinavian Lutheran congregation. Children had now been born to Mr. and Mrs. Anderson. Experience had taught how difficult it is to preserve the children’s interest in the church with a foreign language as the medium of speech. Therefore it became a vital purpose in Anderson’s life to establish an English Lutheran Church in Oakland. The realization of this purpose was made possible, when, in the summer of 1897, the Synod of the Norwegian Evangelical Lutheran Church of America decided to take up English Lutheran missionary work in Oakland. Rev. E. M. Stensrud, residing in San Francisco, was sent as missionary to the place. He started the work in July of the same year. A steady growth was experienced. The Lord blessed the untiring efforts of a few members who, together with the pastor, were determined to succeed. Among them Mr. Anderson was a leader. St. Paul’s English Evangelical Lutheran Church was organized November 3, 1897. St. Paul’s Church enjoyed the distinction of being the first distinctively English Lutheran Church of the Norwegian Synod. 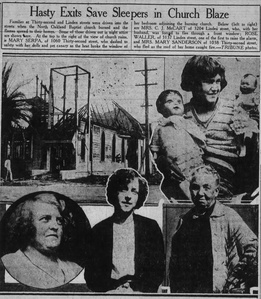