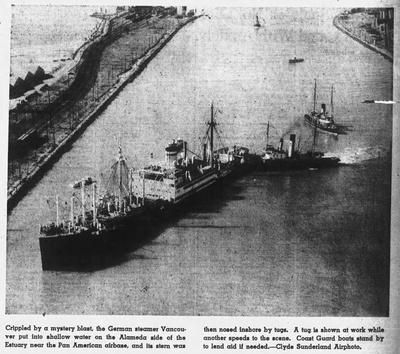 The Steamship Vancouver Explosion occurred on November 3, 1938. Before the US entered WWII, the German-flagged steamship Vancouver was in SF Bay to pick up cargo and passengers. As it was leaving port, an explosion near the engine room blew a large hole in the side and the ship sank in the estuary. It was immediately labeled suspicious, and authorities began an investigation. Nazi officials blamed "communists." 4

The Vancouver was part of the Hamburg-American Line, and had a crew of 54 under Captain E. W. Moessenger. Bound for Antwerp, Belgium, after loading canned goods at Howard Terminal and additional cargo at Encinal Terminals in Alameda, it set sail with 15 passengers. 3 An explosion near the stern blew a 25 sq. ft. hole in the hull below the water line, damaged the engine room, and injured 4 crew members. The captain ran the ship aground to prevent it from sinking in deeper water. The ship had been 15 minutes late leaving port because of a fouled anchor, which turned out to be a good thing, or it would have sunk in the deeper waters of the bay and likely led to a loss of life. 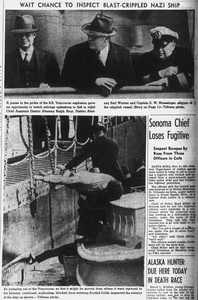 Even before formal investigations began, one thing was clear — the metal of the hull was pushed inward, meaning the blast had come from outside the ship.

As we came out [of the restaurant on Broadway] I ran into a fellow named Harry Adams and a few others from the sheriff's office, and they said, "Gee, they blew a ship up in the Bay." I said, "Where?" "Over in the estuary." That's all I needed...it was either in Alameda or Oakland, but it was in Alameda County. 5

After returning to the DA's office and waiting for Warren, Jahnsen and assistant DA Ralph Hoyt headed to the scene. They arrived on scene about a hour or so after the blast. Besides the Coast Guard directing rescue operations, Fritz Wiedeman, German consul-general in San Francisco had vice-consul Bernhard on scene keeping people off the ship. Warren's office assumed jurisdiction and were eventually allowed on board. Wiedeman was a loyal Nazi, and considered "the eyes and ears of the German Imperial Government." 5

But the investigation was also hampered by the sinking. They couldn't simply pump water out into the estuary, or they'd pump out potential evidence, too. Divers were sent for, and the crew questioned while the outside of the ship was inspected. Much of the investigation would have to wait until the ship was temporarily repaired with a cofferdam, refloated and moved to dry dock.

Later, the inspectors endeared themselves to the crew by getting them some beer:

"What we did was, we went over to the Golden West Brewery, where we had some connections. A lot of those brewers over there were Germans, so we had no trouble in getting a few dozen cases of beer and having them transferred over at no cost. Of course this endeared them to us." 5

The ship needed to be unloaded at the nearby Grove Street Pier before it could be moved to dry dock. 8 Unloading the water-logged cargo was delayed by a brief strike by the stevedores. 10 While this was going on, they dragged the estuary with magnets to try to recover clues. 9

Around this time, it seemed like they had caught a break. Stevedore Herbert Huntsman who was helping unload the cargo boasted "Next time I'll put it down in deep water." Huntsman was arrested and held for questioning. En route to jail he said, "I'll fix the Nazis." He was reportedly drunk at the time of his arrest, and gave a fictitious San Francisco address. 11 But after lengthy questioning, Huntsman said he was just "making some big talk" while intoxicated, and had popped off because he didn't like Nazis. Huntsman was charged with being drunk and released the next day. 12,13

Officials continued following leads, but progress was slow. Eventually the inspectors found the remnants of a metal box and powerful magnets that had been used to attached the explosives to the outside of the ship. It was assumed that the device had been placed while cargo was loaded at the Encinal Terminals where walkways under the pier would have provided easy access. They traced the source of the magnet, but by then the US was at war with Germany, and the investigation was set aside. 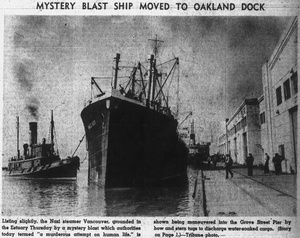 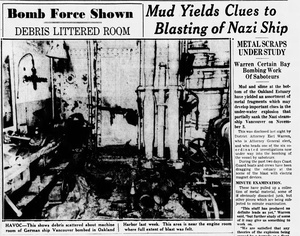 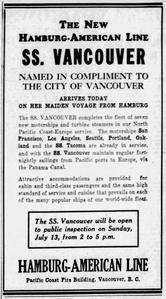 The Vancouver was built in 1930 for the Hamburg-American Line by Deutsche Werft A/G in Hamburg, Germany. 1 The 8,269 GRT, 500 ft. ship was designed to carry both cargo and passengers. Perhaps not as luxurious as many dedicated liners, it was still an elegant way to travel across the oceans (see interior photos on www.ssmaritime.com 1) for up to 50 passengers. After her sinking and the subsequent investigation, she was eventually repaired at the Moore Dry Dock, and put back into service in 1939.

Following the war, in July 1946, she was officially transferred to the Holland-American Line as war reparations. Completely refitted and renamed the Duivendijk, the ship was put into service carrying passengers and cargo. 1