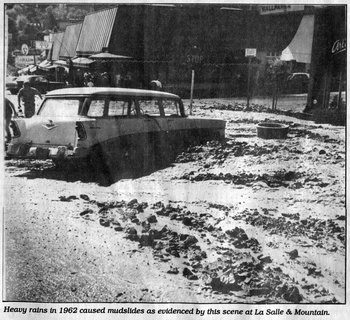 The Storms of 1962 of led to flooding and mudslides all over Oakland. The northwest coast from the Bay Area to Canada was slammed with a series of storms, and led to at least 46 deaths, including two in Oakland. 1 The storms were also accompanied by high winds; weather historians refer to the storms as The Big Blow or the Columbus Day Storm. 2

Landslides and flooding cut off access to the Orinda side of the Caldecott Tunnel, the Cull Canyon dam in Castro Valley nearly burst, and numerous buildings were damaged by flooding, falling trees, and landslides. Game 6 of the World Series in San Francisco was delayed because of the storms. The Nimitz Freeway was shut down because of flooding.

Note the footage of a flooded Grand Avenue; the water flowing down the steps is at the end of South Crossways where it meets Roslyn Court (in the Berkeley city limits), just up the hill from Chabot Elementary.

At 101 Kimberlin Heights Drive, Diana Dobson, age 5, was killed when mud and debris slammed into the house. Her mother was in the process of leading her and her brother James, age 2, from the house. 1 A playhouse was built at Munck Elementary in her memory. 3

The electrical system in the Caldecott Tunnel was damaged by water and mud. For a time, only one tunnel was open, and only during commute hours. From 6AM to 9AM it ran westbound, and from 1PM to 7PM it ran eastbound. 4,5

1962 was a particularly bad year for weather: