The Strategic Policy Partnership, Bob Wasserman's consulting company along with external consultant Bill Bratton, was hired in 2013 to conduct a review of OPD, provide some best practices , and outline a public safety strategy for Oakland. They were contracted to provide three reports (one of the reports they published was the OPD Best Practices Review in Nov.).

The final report that outlines a public safety strategy for Oakland was released on the City Administrator's page on December 30th and then removed (it's unclear why). It was reposted on January 3, 2014. This is the Jan. 3 version:

This was the original posted on Dec. 30th (they may be identical- has anyone checked?): spp final report.pdf

1/26/14 update : This report was not received well by the city or city leaders. Make Oakland Better Now! (MOBN) wrote a blog post outlining some of their disappointments with the report. Larry Reid said his daughter could have written the report and the Oakland Tribune reported that Deanna Santana said the report did not meet the scope of the contract and that Wasserman would be returning for two more visits and producing a new report. Note that Wasserman held a series of public meetings to get community feedback to inform the creation of the reports, but they seemed more like lectures than public input sessions (see the Bob Wasserman tag for notes and details of those meetings).

On pg. 36, the report includes an appendix of Oakland demographics that lumps all the people of Oakland into different kinds of homeowners, activists, and "street people." Is this really how the people who are supposed to be thinking of public safety in Oakland see all of us? There's also a second table on the same page without a title or heading that doesn't even make sense and doesn't even include complete sentences in some places. Here are the tables: 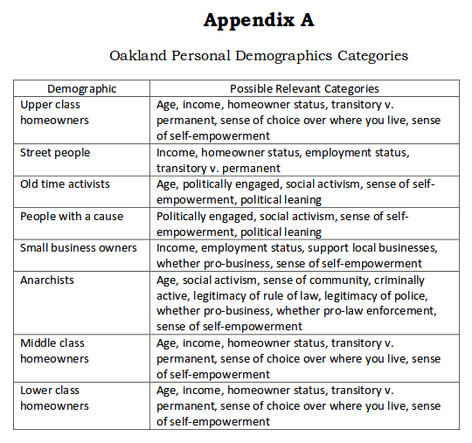 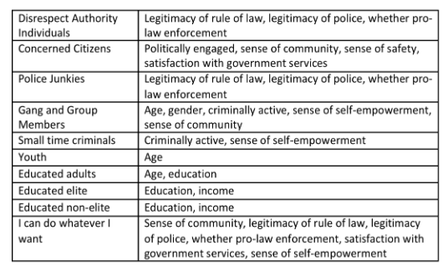 Other highlights of the report

The report lays out a vision that Oakland should strive for in its effort to reduce crime. The report outlines that what can be achieved:

The first portion of the report is a laundry list of to-dos involving services the city provides to residents. Most of the recommendations are broad and lack explanation as to why the recommendations are being made in the first place. But in general, the theme involves greater collaboration between service providers and city agencies in how to deliver services to Oakland residents, with a major focus on keeping Oakland youth safe and away from engaging in criminal behavior.