Taliesin Evans was born in Manchester, England in 1843 and came to the United States in 1862. He studied law and then moved into the publishing business. He worked for the publishers of Overland Monthly and then moved to Los Angeles to work for the News in 1871. When the News went under in 1872, he moved to San Diego to work for the Union. He was the editor of the San Francisco Bulletin for many years. In 1888 he started working for the Oakland Tribune.

Evans was a frequent contributor to the San Francisco Chronicle. His pieces include "Imperial Possibilites of California," dated Dec 30, 1900, "Coming of a Greater San Francisco," dated Jan 3, 1897 and "ALAMEDA COUNTY: Its Attractions, Resources, Capabilities and Wants," dated Dec 29, 1895, along with other booster-type articles. 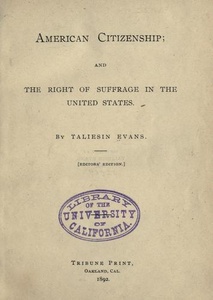 Evans was the author of several books/published speeches. In 1892, he published a treatise entitled "AMERICAN CITIZENSHIP AND THE RIGHT OF SUFFRAGE IN THE UNITED STATES." The most topical (not available online, at least in an easy-to-find location) is Municipal Government with a Special Consideration of the Charter of Oakland, which was a speech given in 1892 to the St. Andrews Society and published in booklet form. One of his essays, "Hydraulic Mining in California," has been reprinted in numerous modern-day books. 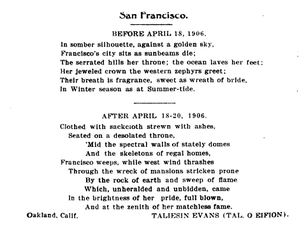 "San Francisco" published in The Cambrian 6

Other Positions in Government