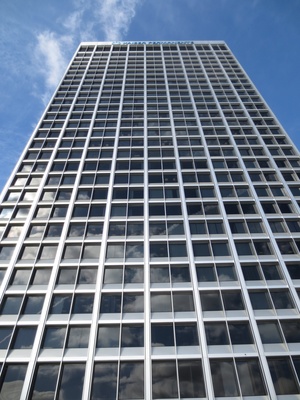 Ordway Building
CC SA-BY Our OaklandThe tallest building in Oakland is currently the Ordway Building, but as you might imagine, others were the 'tallest' before it was built. Taller buildings have been proposed, but none have been built yet.

Note that people often incorrectly say the Tribune Tower was once the tallest building in Oakland, but the Tribune Tower is only 305 feet tall, and thus shorter than City Hall, and was constructed in 1923, after City Hall was completed. Early ads describe it as "Oakland's tallest office building". 1 Similarly, a 1931 ad for Breuner's says its new building will be "Oakland's tallest mercantile building." 2 The soon-to-be-completed Atlas Building is 401 feet, 40 stories, making it the tallest residential building in Oakland, and only 3 feet shorter than the Ordway Building.

NB: The list on Wikipedia originally included the Oakland Bank of Savings Building, which was constructed in 1907 at 8 stories, 106' tall. The 18-story, 255' addition wasn't built until 1922.

None of these has ever been the tallest building in Oakland, but are or were of notable height.