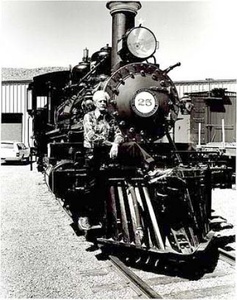 Theodore Grover "Ted" Wurm (January 5, 1919 – February 23, 2004) was a railroad historian, social activist, and author of five books on the history of Western railroads. The longtime resident of Oakland was also an avid runner who ran 13 marathons at the age of 60.

Among the books he authored or co-authored are “The Crookedest Railroad in the World,” “Narrow Gauge to the Redwoods,” “Hetch Hetchy and its Dam Railroad,” “Silver Short Line” and “Mallets on the Mendocino Coast.”

He was also very involved with railroad, neighborhood and preservation organizations, as well as Glide Memorial Church in San Francisco.

In 1969, he resigned from the Elks because the group at that time excluded African Americans from membership, and he felt that did not represent the true concept of Americanism.

Wurm was friends with labor leader César Chávez and helped build the Visalia hospital for farmworkers in Tulare County.

During the 1960s and 1970s he participated in anti-Vietnam War marches in Berkeley and threw his WWII medals over the fence into People’s Park.