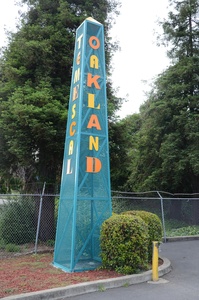 The Temescal Obelisk is a welcome sign at 52nd and Shattuck on the property of the Speedy Pennzoil Oil Change and drive-through espresso business near the 24 freeway onramp. The sign was designed by Ellen Kim at the behest of the business owner and the Temescal Telegraph Business Improvement District (TTBID), and was installed in October, 2014.

The sculpture has garnered the ire some in the community who object to the aesthetic vision of the project and believe that public outreach from TTBID was inadequate. Due to the controversy, the TTBID decided in June of 2014 to put the project on hold until further planning and community input could occur. The TTBID held a meeting to discuss the sign project with the greater community and hired mediator to run the meeting, but only one person opposed to the project attended. 2 Whereas, some would rather that a fully-grown tree be planted instead and others just think the proposed design is ugly, more appropriate for the "Las Vegas Strip or a Putt Putt Golf course", 1 the overall consensus seems to be either approval of the project or lack of interest.