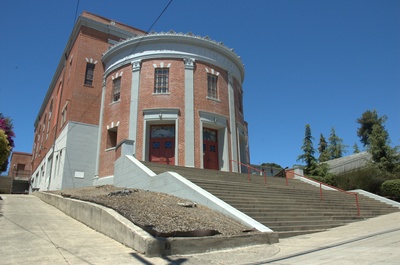 Temple Beth Abraham is a synagogue, founded in 1907, and named in honor of Abraham Bercovich. It is affiliated with the United Synagogue of Conservative Judaism. 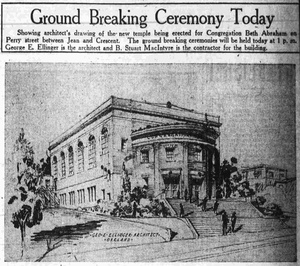 Abraham's wife Bertha donated land for the construction of the first shul on 5th Street and Harrison Street, in memory of her late husband. That land was taken by eminent domain in 1925 to build the Posey Tube. When the congregation wanted to move to the more affluent Adams Point neighborhood, the Bercovich family endowed the current building on MacArthur Boulevard; it was consecrated in 1929. George Ellinger was the architect. 2

The first rabbi hired in 1928 was Moses Goldberg, who tragically died in an auto accident on his way to deliver a contribution for the building fund. 1