Background and why it matters

Causa Justa's recommendation (more details below) is that "the costs of capital improvements to an apartment must be spread out for enough years that the unit's rent does not increase by more then 10 percent in a given year. No combination of improvements can raise rents by more than 30 percent over five years." (from the same article).

But!: "city leaders still have to decide what percentage of the capital improvement costs a tenant must pay." (same source) This is the main issue that was before council on March 18th and will return to council on April 22nd (see below for more details).

Details of the recommendation

Here are the details of what they're proposing (from here): 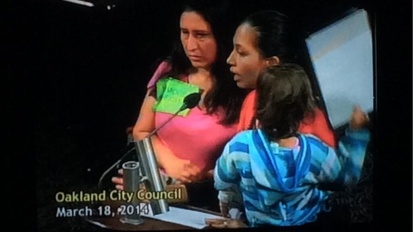 There were over 80 speakers on the list for this item. Many of the speakers were in support of Causa Justa's proposal. Here are some examples of what speakers had to say (many stories of abusive practices from landlords): one, two, three (in Chinatown), four (from a church), five (from Youth UpRising), six (from landlords), seven (from PolicyLink), eight.

City Council didn't come to an agreement on this issue on March 18th.

The issue will return to City Council on April 22nd when council will vote on whether the pass-through percentage on capital improvements will be 50/50 or 75%.