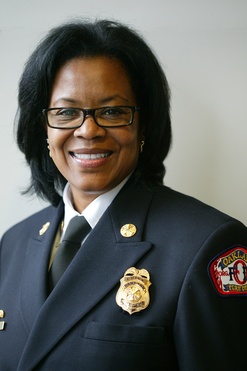 Teresa Deloach Reed is currently Fire Chief for the City of Oakland. She is the first woman to be named chief in the 142-year history of the Oakland Fire Department.  Reed is also the first African-American woman to lead a large metropolitan fire department.1

Though a 22 year resident of Oakland, Chief Reed began her career as a San Jose firefighter in 1986.

According to the U.S. Bureau of Labor Statistics, as of 2010, less than 4 percent of U.S. firefighters were women, and just over 6 percent were black. 2

In March 2012, Belva Davis interviewed Chief Reed for KQED This Week in Northern California in honor of Women's History Month. 3

Chief Reed has a Bachelor of Science Degree in Organizational Leadership from Mountain State University and a Masters Degree in Public Administration from National University. 1