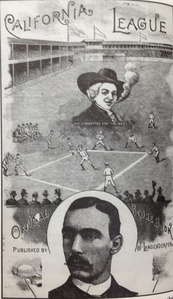 The California League was unofficially formed in **** but became formalized in 1886 with over 30 games for each of four preexisting teams in San Francisco and new teams in Oakland and Sacramento. By 1889, the primary teams were in San Francisco, Oakland, Sacramento and Stockton.

The California League was known for playing on Sundays. Originally, baseball was prohibited on Sundays out of a sense of religious righteousness, but in 1878 this prohibition was lifted. Traditionally every team played a Sunday game and often a game was played on Sunday mornings in Oakland and then fans took the ferries over to San Francisco to watch an afternoon game, a historic version of the day-night doubleheader.

In 1886, the league banned the sale of alcohol to players at the ballpark.

Also in 1886, the California League applied to become a member of the National League of Professional Base Ball Clubs, with jurisdiction over the West Coast. The teams played in various places including Trotting Park, a stadium in Alameda, and various fields in San Francisco.

In 1889, the clubs were named not after their sponsors (Haverly and Greenhood and Moran), but by their eponymous cities. At this point, each team had 94 games in a season, and played on Thursday, Saturday and Sundays in San Francisco and Saturday and Sunday in Oakland (and Stockton and Sacramento). At this point, Oakland's population was 50,000 but they still had to go to San Francisco to watch baseball: "they continued as a California League stepchild." 1

Also in 1889 the league set up a billboard-type diamond on Broadway near 14th street: San Francisco Examiner employees would receive telegraphic reports as the games were played and move pegs around the board and fans would "watch" the games this way. The Oakland club (The Oaklanders) won the pennant in 1889. At this point, Oakland was involved in one of their first struggles for a new ballpark. They were sick of playing in Alameda (a crappy ballpark full of rocks) and travelling to San Francisco was tedious for everyone involved. They tried to play at the Center Street Park at 13th and Center, but the park failed a sanitary inspection and the owner shut the place down in a foreshadowing of issues with Lew Wolff.

In 1890, the league expanded to 139 games, which was as many in any league around, including the majors. Games were now played on Thursday, Friday, Saturday and Sunday. Oakland games were played on Friday afternoon and Sunday morning. Tom Robinson opened up a park near Trotting Park that would seat 1500 people. In 1891, San Jose replaced Stockton as the 4th team in the league.

In 1892, a Los Angeles team was added. Sacramento was eliminated from the league. The schedule was again expanded and now ran from the last weekend in March to the last Sunday in November (baseball fans of today drool at the thought). Oakland games were now played afternoons on Wednesday and friday and in San Francisco on Thursday, Saturday and Sunday. The teams traveled south to play in San Jose and Los Angeles on Thursday through Sunday and sometimes in Wednesday in San Jose.

Because two games a week were played in Oakland, Robinson worked out a deal for a new/better ballpark in Oakland on March 9th. He built a park near the Piedmont Baths, which were on the Piedmont Cable Co trolley line. The owners of the trolley line financed the project and then rented it to Robinson at the price of $35/month. Located at Waverly Street in the modern Waverly neighborhood, the site was 320x450 feet. It only took three weeks to build (Wolff, you paying attention?) Bad news was coming, though, as on April 6th the Oakland Tribune complained that the playing field was "too small." It got worse: by May, San Francisco wouldn't even play at the new field. They claimed it was because the field wasn't kept properly, but it was probably because not enough people came to the games. (Oakland history really does repeat itself.) Eventually the games started up again.