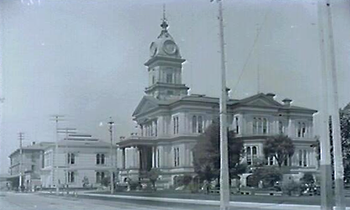 The Centennial is not to be confused with Centennial House, a hotel on 7th Street and Cedar in West Oakland.

Questions/Problems: I'm hoping to find a better picture of The Centennial, but the name makes it horrendously difficult to search on. Also, it doesn't seem that big to have the wealthy Blair family plus other people living in it. The above list includes people from the 1877, 1884-85 and the 1887 directories, but even limiting to 1877, it doesn't seem big enough to have 8+ people plus staff. Maybe it's just the perspective next to the larger city hall building.

Also, this article describes it: "He also built a large three-story hotel in 1876, at the corner of Fourteenth and Clay streets, known as the “Centennial,” which is still a portion of his estate and was his home at the time of his death." -- Gene