The Lake Merritt Mural was a large mural depicting a panoramic scene of Lake Merritt, on 27th Street across from First Presbyterian Church. The mural was painted in 1987-1988 by Dan Fontes. It was fully visible in January 2010, but by March 2013, it had been tagged and the bottom portion painted over. By September 2013, it had been so badly damaged that the building residents decided it was an eyesore and painted the entire wall. 1

In 2015 Dan Fontes sued both the operator who owned the car dealership when the mural was tagged and the current operator who had it painted over. He is asking $400,000, alleging a copyright violation under the Federal Visual Artists Rights Act.2 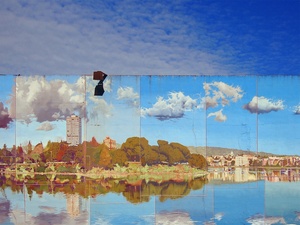