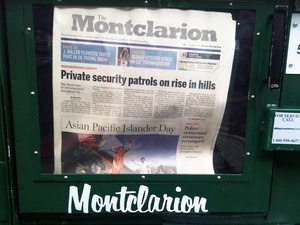 The Montclarion (tagline: The Newspaper with the Hillside Slant) is a local weekly newspaper covering the Montclair district and surrounding hills. The paper is distributed free throughout neighborhoods such as Montclair and Rockridge. It used to be delivered to every house in these neighborhoods, but it is now only delivered to Oakland Tribune subscribers as an insert to the Friday Trib. The paper can also be picked up racks at selected locations in Oakland, as listed below.

However, don’t think it’s on the same level as those free papers one might pick up outside a BART station. The Montclarion has been around since 1944, with high enough journalistic standards that plenty of Oaklanders outside Montclair subscribed to it. Its coverage used to be more like pan-Oakland, but from a Montclair perspective, making it a good counterpoint to, say, the Oakland Tribune.

Originally part of the small Hills Newspaper chain, The Montclarion was later purchased by the Contra Costa Times’ parent company, itself later folded into the Bay Area News Group, owner and publisher of the Oakland Tribune. In this waning era of newspapers and wholesale media consolidation, today much of the paper’s content is lifted from the Trib (which is now indistinct from the San Jose Mercury News, Contra Costa Times, etc.), with a few specialized columns of local interest. It is to be hoped that knowledgeable folks will continue editing this article to add more on the current state of this paper, how it manages to survive, etc. 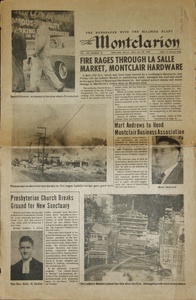 There were two earlier editions of the paper  one put out by the  Montclair Garden Club published a newsletter called the Montclair Clarion in the early 1930s and the "Montclarion".

Staff, Past and Present

According to the circulation department of the Bay Area News Group, the Montclarion is available in racks at the following locations: