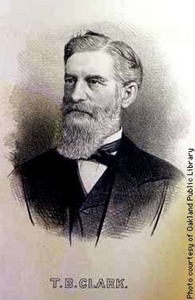 The Periodical Ghost refers to stories of a haunted house in April 1874. It began with "incessant clanging of the doorbell just after midnight" in the two-story mansion leased by Thomas Brownell Clarke at the southwest corner of 16th and Castro. There were also reports of furniture flying about the house, and a "shrill shriek of mingled pain and rage." 1

Clarke was a clerk at the Sub-Treasury in San Francisco. He lived in the house with his wife Julia Beatrice Rice (Clarke) and their daughter Helen Julia Clarke. 6 NB: Clarke is spelled Clark in some sources.

Oakland, April 26th — The house of Mr. Clarke, on Castro street. about which many astonishing reports have been in circulation during the past three days, was visited by the Rev. Dr. Eells (pastor of First Presbyterian), Major Vernon, and another prominent gentleman last night, and they remained all night. Your reporter has received the following statement from two of these gentlemen: While standing on the sidewalk a loud crash inside the house startled them. The door soon after opened and they were invited in to see the cause. A heavy marble-top bureau at the top of the stairs had fallen forward, and deeply indented the balusters, without showing a scratch on itself, and without breaking the mirrors. Ten minutes later a heavy chair came whizzing down stairs, breaking a leg in the fall. Half an hour later a light paper box whirled down. At midnight they saw a heavy trunk fall with a startling crash, rebounding from the wall to the baluster, deeply indenting both, and striking the floor with such force as to break its iron straps and wrench its top from the hinges. On examination the visitors saw that the passage to the door, from trunk's usual place of deposit, was very narrow and crooked, and that no one or two men could have carried it along that passage without sufficient jostling or noise to be audible to the inmates. It had not been slid, but hurled down. No man in the house could have accomplished the feat. Later a shrill shriek of mingled pain and rage was heard, apparently in the hall below. Other demonstrations occurred during the remainder of the night, but of less startling character. One of the gentlemen closes his statement as follows: "What I have seen and heard to-night is the work either of devilish spirits, or of equally devilish man. I am not prepared to say that none but spirits could have wrought out what I saw and heard. On the contrary, all could be explained by the use of human ingenuity, refined and combined; but an explanation would be extremely improbable." 1

News of the strange goings-on quickly spread. Theories were put forth, but no explanation was found. One idea was that the men knew a number of passengers on the Arizona, bound for Panama, and the events signaled some calamity that befell the steamer. But it had arrived safely in Panama earlier in the month. 4 Other newspapers were a bit more circumspect in casting about for explanations. 5

Clarke seems to have been a firm believer in the supernatural and spiritual realms. Beginning in 1877, he published several booklets said to have been authored by George Washington, his wife Martha, and his mother Mary. These were titled:

The text was 'transmitted' via Mrs. M. J. Upham Hendee of San Francisco.

"A Case of Poltergeist"

Some years later in 1905, Helen Clarke gave an account and investigation of the occurrences to James H. Hyslop. More years passed, and much of this information was published in the Proceedings of the American Society for Psychical Research in 1913. It includes first-hand accounts written out immediately after the events, and records from those who interviewed the witnesses later. Brief biographies of the witnesses are included. 6 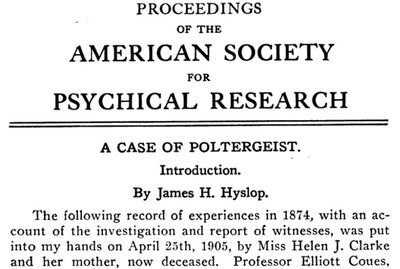 The mansion was later torn down to make way for I-980.

Over 100 years later, the 'ghost' was posited as the source of odd events in nearby homes at 17th and Castro. 2

The Oakland Ghost and Ancient Phenomena, With a Review of the Oakland Committee by Thomas B. Clarke is available online. 7