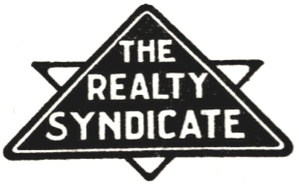 The Realty Syndicate (1895–1929) was a real-estate development group created by F M Smith and Frank Havens. Headquartered in a purpose-built 1903 skyscraper at 1440 Broadway, it was Oakland’s leading real estate development firm until the 1929 stock market crash brought everything to a standstill2.

At first, the Syndicate’s interests were closely aligned with Smith’s other transit interests (the Key System). (Yes, the selfsame folks building “sprawl” – i.e., new developments on the outskirts of older ones – were also building the transit infrastructure to serve said sprawl. Today, such a concentration of involvement – even minus the now-loaded word “Syndicate” – might trigger an antitrust investigation, but at the time no one batted an eye because people were so glad to own new homes etc. There was probably also more than a hint of Manifest Destiny in it, too – a sense that by rights, if not Natural Law, Oakland had no business remaining undeveloped.) But by 1913, Havens had withdrawn from the company, and then Smith’s finances crashed and he was forced to resign. With its founders gone, the company’s subsequent projects became less grandiose, yet a steady demand for housing and land enabled it to soldier on successfully for another 16 years.

The Syndicate invested, planned, developed and promoted various neighborhood projects such as: