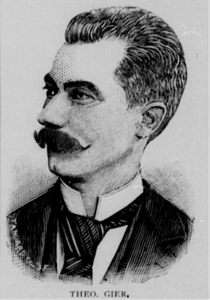 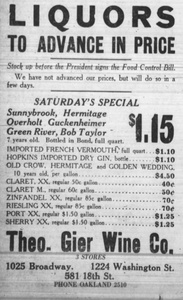 1917 adFrom Past and Present of Alameda County California, Vol. II

Published in Chicago by The S. J. Clarke Publishing Company, 1914

One of the most prominent and widely known men in California is Theodore Gier, founder and president of the Theodore Gier Wine Company of Oakland. He has displayed both initiative spirit and a genius for organization and never fearing to venture where favoring opportunity has led the way, he has reached a commanding position in connection with one of the most extensive and important productive industries on the Pacific coast. One interest alone, however, does not indicate the scope of his activities, for his efforts have extended to many fields touching closely commercial, industrial and financial interests and aside from all of these lines of endeavor in which his labors have brought him profit, he has put forth effective efforts for the benefit and upbuilding of his city, county and state, cooperating largely and generously where the welfare of the community has been involved.

Mr. Gier is a native of Peine, Hanover, Germany, and acquired his education in the public schools of that locality. He learned wine making in Peine and was afterward a wine salesman in various parts of Germany. In 1881 he came to America and after spending one year in Chicago traveled through various eastern states. In 1882 he came to California and bought a small ranch at Anaheim, which he later sold, moving to Oakland, where he established himself in the grocery business. In 1890 he became identified with the wine making industry and in this field has since made rapid advancement to a position of distinction and importance. In 1893 he bought a vineyard in Livermore, in 1898 another at Napa and in 1901 the second vineyard at Livermore. He owns also a vineyard at St. Helena, purchased in 1903. His extensive wine making interests are conducted under the name of the Theodore Gier Wine Company which was incorporated a few years ago for one million dollars. This company operates vineyards aggregating over one thousand acres and has wine cellars capable of storing more than a million gallons at the different vineyards. The general offices, salesroom and wine cellar at Nos. 581-593 Eighteenth street in Oakland occupy a floor space of twenty-six thousand four hundred square feet. The local wine cellar is one of the most sanitary and best equipped in California. The company makes a most complete variety of wines and disposes of about three hundred thousand gallons every year, the Giersberger brands having become a standard article all over the United States.

Some years ago Theodore Gier contributed a very interesting essay on wine culture for "Facts and Figures," of which the following paragraphs are extracts:

"The numerous medals that have been awarded the wines of Alameda county in competition with American as well as foreign wines, both in America and Europe, and the flattering commendations of connoisseurs, have established beyond a doubt the natural fitness of both soil and climate to the production of the highest grades of wines, especially of the Sauterne and Cabernet types. It is with pride that we speak of the numerous medals that were awarded our wines at the Paris Exposition in 1889, and latterly at our own Columbian Exposition in 1893. The encouragement of our achievements has given the industry renewed impetus and shown possibilities of greater success than was conceived of.

"It is a sad commentary upon the American wine drinkers that dealers at times, in order to get the higher grades upon the market, have been compelled to sell them under foreign labels. I have known of higher grades of Alameda county wines being sold in the New York markets at enormous prices under foreign labels. In my opinion the time is not far distant when California will supersede the world in wines and Alameda county will be in the foreground. I have been associated with the production of wines the greater portion of my life and have had experience in other parts of the state, but believe Alameda county to have superior advantages, both in soil and climate, to most any other locality, especially in the production of the French varieties of Sauterne and Cabernet types.

"In 1892, in company with two gentlemen from Rhode Island by the names of Barker and Chesbro, I traveled through Germany and Austria, visiting the leading wineries, inspecting their methods and studying their wines with a view of acquiring such information as might be of service in this country, and brought back much valuable knowledge, some of which I have been able to put to practical use; but, on account of the difference of our soil and climate, everything must be modified to suit our conditions. In my vineyard at Livermore I have in bearing about two hundred twenty-five acres and am now adding about thirty acres more.

"I have one hundred and twenty-five different varieties of grapes in all, many of which are for experimental purposes. Among the above varieties, from which my finer grades of wine are produced, are Cabernet, Sauvignon, Cabernet Franc, Verdot, Petit Sirrah, Sauvignon Blanc, Semillon, Petite Pinot, Petite Bouchet, Folle Blanche, Muscatel du Bordelaise, Green Hungarian, Grand Noir and Zinfandel. With two or three exceptions these grapes have been imported from France with a view of producing the Sauterne and Cabernet types, so popular among wine drinkers, and our success has far exceeded our expectations. There are in Livermore Valley about four thousand acres of producing vines, and the output in 1911 in round numbers was three and one-fourth of a million gallons."

Mr. Gier married in 1886 Miss Ferdinande Hornung, a native of Marysville, California, and they have three daughters--Grace, Elsa and Amalie. Mr. Gier is connected fraternally with the Elks, the Independent Order of Odd Fellows and the various Masonic organizations, and he gives his political allegiance to the republican party. As a public-spirited and progressive citizen he takes an intelligent and active interest in public affairs and to his influence and energy is due the promotion of some of the most important public and semi-public enterprises in this part of California. He was one of the founders and is a director of the Security Bank & Trust Company of Oakland, aided in the establishment of the Merchants' Exchange, of which he served as president for several years and of which he is now director, and was one of the founders and still is a director in the Oakland Chamber of Commerce. He was one of the promoters of the Oakland Exposition in 1897 and served as vice president of the association and was president of the board of commissioners for Alameda county to the Louisiana Purchase Exposition, at St. Louis. In addition to this he promoted the tunnel between Alameda and Contra Costa counties. In 1903 he was honored by Emperor Wilhelm of Germany, being presented by an order of the crown in recognition of services rendered during the Boxer war in China. Mr. Gier is easily the leader in the wine industry in California and is a splendid representative of the prominent manufacturer and capitalist to whom business is but one phase of life and who does not allow it to exclude him from active participation in the other vital interests which make up the sum of human existence.

"Among the younger business men of Oakland there are but few who occupy so commanding a place in public estimation as Theodore Gier, a vintner, in the trade world, having a custom that extends beyond the limits of Alameda County, it is as a member of commercial and fraternal organizations that he has achieved a record which his many friends view with pride. One of the original promoters of the Oakland Merchants' Exchange, he has signalized that connection by actions in which civic spirit, liberality and acumen have shown bountifully and forcefully. As a projector of the Oakland Exposition, he evinced faith and industry, and his share of the laudation to be distributed cannot be inconsequential. Mr. Gier, although of slight frame and of uncommon nervous tension, bids fair to be a special factor in Oakland's expansion and enrichment for many years to come. Deferential in address, pleasant of speech, rapid in arriving at a conclusion, honorable in dealing, he is worthy of much more praise than Echoes is now awarding. — Oakland Echoes.  Mr. Gier is one of Livermore Valley's energetic and progressive property owners. His vineyards near town are kept up handsomely, and are a valuable property."  Livermore Herald, Volume 19, Number 13, 25 January 1896

"Theodore Gier &. Co. was the first grocery firm to take out a license allowing them to sell liquor irrespective of quantity." Daily Alta California, 25 July 1887

Oakland: Athens of the Pacific (1897) has two photos from Giersberg Vineyard in Livermore (p. 62) and an essay on "Wine Culture" by Mr. Gier, which was quoted above on this page, attributed to "Facts and Figures."