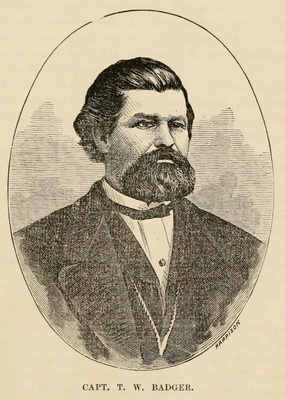 Rewarded Years Ago for Bravery.

Captain Thomas W. Badger is seriously ill at his home in East Oakland, and but little hope is entertained for his recovery. The captain is one of the best known pioneers of this city, and indeed at one time owned a large portion of the territory on which modern Oakland is built. He is an old sailor-pioneer, having followed a life at sea until he landed in San Francisco on the 5th of August, 1849. For a long while he engaged in the shipping business in San Francisco, and had vessels trading all over the coast until 1872, when he retired from that business and interested himself in his public park at Brooklyn, East Oakland, which he purchased in 1861. Eleven years later he commenced building his great pavilion at Badger's Park, and after an expenditure of $50,000 Badger's Grand Central Park was thrown open to the public. The result was an immediate success, and his park, dancing hall, ten-pin alley, museum, amphitheater, menagerie, flower-garden and sailing pond were very extensively patronized until they were destroyed by fire many years ago.

One of the most valued possessions of the old captain was presented to him in 1858. It was a silver trumpet, subscribed for by citizens "In token of their high appreciation of Captain Badger's conduct on board the steamer Central America at the time of the loss of that ill-fated vessel." The steamer was on a trip from Aspinwall to New York and in rough weather was wrecked. Her captain and officers were among the lost and Captain Badger assumed management of the foundering steamer, which he kept afloat until relief came from a Norwegian bark. To his efforts was attributed the saving of nearly 200 lives. On arriving at New York the citizens at once subscribed to give him a memento of their recognition of his bravery, and he could just as easily have had a large sum of money as a silver trumpet, but he declined, although in the wreck he lost $20,000 in coin which he had made in California.

Under the administration of Governor Haight Captain Badger was a Pilot Commissioner of San Francisco, and held the office for many years. His large holdings have very materially decreased, and about two years when the City Council proposed to make some very extensive improvements near Badger's Park the old captain appeared before that body and said that if the Council were determined to carry out these improvements it would bankrupt him entirely. He closed a very earnest appeal by telling them that after he was gone would be time enough to go ahead with the proposed work.

DIED WHILE A GALE WRECKED HIS OLD BARK 3

Captain T. W. Badger died early this morning after seventy-three years of active and useful life. The story of Captain Badger's eventful life was told in The Call two weeks ago, but since that time a strange coincidence has occurred, for while the captain was breathing his last his old ship, the Jane A. Falkenburg, was being ground to pieces on the Mendocino coast.

Captain Badger married Mrs. Jane Falkenburg, the widow of the original owner of the bark, in 1856, and for many years the couple have lived at their home in East Oakland.

The funeral will be held from the family residence on Thursday morning, the services being conducted by Rev. Hamilton Lee. The remains will be interred in Laurel Hill Cemetery.

One of Captain Badger's companions or the most eventful voyage of the steamship Central America was ex-Chief of Police Fletcher.

"We left San Francisco," said Fletcher, "on the 20th of August, 1857, on the Sonora. Crossing the Isthmus of Panama we took passage for New York on the Central America. On September 8 we left Havana in Cuba, where we had put in to coal. We took a gale as soon as we left port. Four days the storm kept up with incessant fury, the ship going down on the evening of September 2.

"The Central America was commanded by Lieutenant Herndon of the navy. During the voyage Captain Badger had as much to say as Herndon in the managing of the vessel. The trouble was with the water. It got into the fireroom. Most of us men being miners, rigged up pumps and worked away endeavoring to keep the ship afloat. We even resorted to balling. We emptied all the boilers and water casks in the hope that the vessel would not sink.

"On the afternoon before the ship went down a schooner came alongside, but refused to lay to and help us out. Next came a brig, which lay off at a distance and agreed to take of our passengers. Captain Herndon issued orders that the women and children should all go first and they did.

"Forty-nine of us men, Captain Badger among them, were picked up by the Norwegian bark Ellen from Honduras. On this we made Norfolk, Va., and later got into New York."