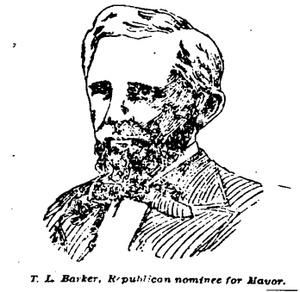 Timothy Barker was born in Connecticut and came to California in 1849. Barker was a member of the Cayuga Joint Stock Company and worked in San Francisco before going to Stockton to work in the mines. After the dissolution of the stock company, he worked in other mines before moving to Sacramento and working at a grocery firm. In 1852, Barker farmed in Hayward (then Haywards) before returning to the East Coast in 1855.  After some trips back and forth, Barker returned to San Francisco and the West Coast for good in 1864. In 1872 he married Mary Simpson and in 1874 they moved to Oakland.

In 1893 Barker ran for mayor as the Republican candidate against... and lost.2

Barker was a buyer for Booth & Co, the grocery firm that both L. A. Booth and Newton Booth, later governor of California, owned at one time. Governor Booth appointed Barker a trustee of the Deaf, Dumb and Blind Institution and he served from 1872 until 1876.3

In 1899 Barker and E.C. Sessions sued to have A. C. Barney removed as the receiver of the Highland Park and Fruitvale Railway. The two men alleged that Barney was intentionally mismanaging the company, causing the stockholders (including Barker and Sessions) to lose money.6

Barker may be partially responsible for the delicious taste of Oakland drinking water. In 1887, along with Eli Playter, he brought the matter of the "bad smell and taste" of Oakland's water which was supplied by the Contra Costa Water Company and suggested they contact Anthony Chabot.8

Barker is also credited with being among the founders of Piedmont. Along with James Gamble, L.A. Booth, James de Fremery, and George Beaver, he was a member of the Piedmont Land Company. These guys owned, developed and sold the land that became the tiny, wealth enclave that is a story for another wiki.4

By one account, he was "characterized by a sweetness of disposition, a fine courtesy, a geniality and a kindly spirit, which made him beloved by all who came in contact with him. He grew old gracefully and wore his silver corwn with dignity and radiated sunshine to the last." By another account, "he was a real pioneer, an argonaut who cast his lot with California three score and one years ago, when this was a virgin land. By his energy and enterprise his fortunes rose with the prgoress of the state, and all that he gathered and gained was not at the expense of another. All his long business record is as stainless as a star. His personal characteristics were especially charming."5 An article from Barker's mayoral race (that apparently he didn't want to enter) describes him as a more typical politician: he accused his competitors, Fitzgerald (Democrat) and Pardee (non-partisan) of not having time to fulfill Mayoral duties if elected. He also accused another rival, Davie (Populist), of pandering to Oakland's "Kearnseyism" sentiments. The article calls the race the most bitter in Oakland history.7

Photo courtesy of Alameda County: the Eden of the Pacific. (free google eBook).