Thomas Jefferson “Tom” Hanks (July 9, 1956) is an actor, director, producer and writer, with a strong connection to Oakland.

Born in Concord, California, the third child of Amos and Janet Hanks, Tom Hanks is credited with having tremendous resilience in the face of considerable family instability, frequent moves, and general upheaval throughout his childhood. After his parents separated in February 1962, his father began a string of marriages and jobs, moving Tom and two of his three siblings to Oakland in 1966. In 1967, the Hanks family lived at 4225 Harbor View Avenue in Redwood Heights. 9 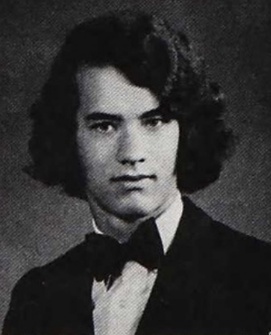 Tom Hanks Senior Skyline High School 1974Hanks was a good student, attending the now-closed John Swett Elementary School (where he came back to plant trees around 1980), Bret Harte Junior High, and graduating from Skyline High School in 1974. "In his senior year he left home and took up residence with a family from the church, supporting himself by working as a bellhop at the Oakland Hilton Hotel." 1

After attending community college in Hayward, Hanks transferred to Sacramento State University, where he majored in theater. In 1980, Tom Hanks left college to pursue acting in New York and the rest, as they say, is history.

Skyline High School drama instructor Rawley T. Farnsworth took Hanks "under his wing" so to speak, casting him in a number of school plays. 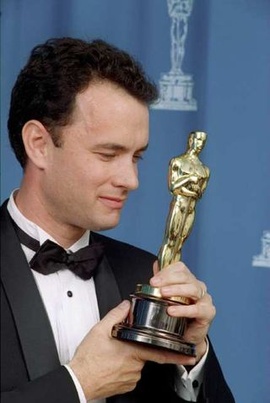 Tom Hanks at the 66th Academy Awards in 1994, where during his acceptance speech he thanked Skyline High School drama teacher Rawley Farnsworth 3Three days before Tom Hanks won the Oscar for Best Actor, he called Mr. Farnsworth, with whom he had lost contact over the years, to ask permission to mention him in an acceptance speech if he (Hanks) won the Academy Award.6  Hanks is quoted as saying, “I don’t know if you’ll remember me, but I’m an old student of yours. I’ve got a ticket to the Academy Awards, and if I win, I would like to use your name in regard to the content of Philadelphia.” 7

When Hanks won the 1994 Academy Award for Philadelphia, he thanked Farnsworth for being so encouraging: ”I would not be standing here if it weren’t for two very important men in my life, so ... two that I haven’t spoken with in awhile, but I had the pleasure of just the other evening. Mr. Rawley Farnsworth, who was my high school drama teacher, who taught me to act well the part, there all the glory lies. And one of my classmates under Mr. Farnsworth, Mr. John Gilkerson. I mention their names because they are two of the finest gay Americans, two wonderful men that I had the good fortune to be associated with, to fall under their inspiration at such a young age. I wish my babies could have the same sort of teacher, the same sort of friends."2

And if that wasn't reason enough to admire Tom Hanks, consider the fact that he has a typewriter collection! 8