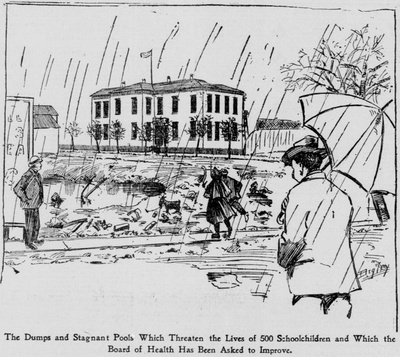 In 1898, there was discussion about moving the school because of its location near the then marshy shoreline: "Being: so near to the marsh, with such poor surroundings, pupils have avoided it, Parents have found excuses to have their children transferred to one of the other schools in the district" 7 In particular, a 'bog' across from the school that had become a dumping ground was said to be a health hazard. 9 The new location was to be Castro Street just north of 7th Street. However, parents and neighbors objected to the school being moved, and suggested the money be spent improving the area around the school instead of moving it. 8 The complaint was not new; some had blamed William Clawson's death in 1882 on the pools.

In 1911, the school and several others in Oakland had playgrounds with swings "and other modern apparatus" added. 6 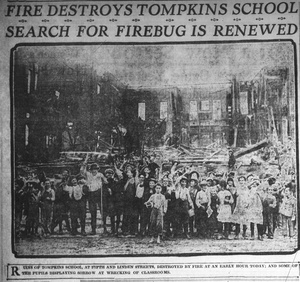 Early in the morning of August 21, 1914, a fire broke out in the southwest corner of the building. Two policeman, Patrolman Maxey and Special Policeman Robertson, sounded the alarm at 2:55 AM. There was concern for nearby buildings, and some area residents moved their belongings out into the street in case the fire spread. The fire was under control by 6:00 AM, but by then school was destroyed. Arson was thought to be the cause. 13

A new building was constructed nearby and opened October 11, 1915. 11 There was a movement to rename the school for Edwin Markham, but the school board vetoed the idea. 12

Local historian Ruben Llamas attended first grade at Tompkins Elementary c.1942, and notes in Eye from the Edge that the school was at 3rd and Adeline. (The 1944 directory lists Tompkins School at 1075 - 5th St. 10)

The 'new' school was closed in 1964, and scheduled for demolition because of the nearby Acorn Redevelopment Project. 12 It sat empty for a time, but the wrecking ball came in 1965. 14 The land was put up for sale later that year. 15 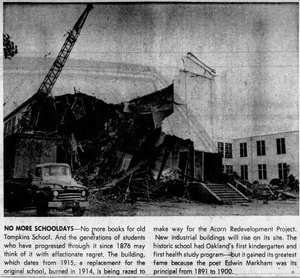