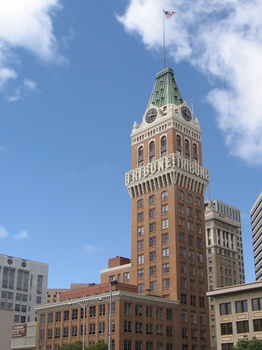 The 22-story Tribune Building and Tower is located at 409 - 13th Street in Downtown, Oakland. When the tower was constructed in the 1920s it was the second tallest building in Oakland, standing at 305 feet (city hall, constructed in 1914, is 320 feet). Today it is Oakland’s 11th tallest building. The six-story base building (minus the tower) dates from 1906, and was designed by  D. Franklin Oliver. In 1923, Tribune publisher Joseph Russell Knowland commissioned architect Edward T. Foulkes to add a Renaissance Revival-style tower, inspired by the campanile of Saint Mark’s Basilica in Venice, Italy, to the Tribune Building. The building, now comprising 89,251 sq. ft. opened on January 1, 1924 as the home of the Oakland Tribune newspaper, a symbol of both the Tribune as well as the City of Oakland.

The 1989 Loma Prieta Earthquake forced the Tribune to leave. In 1995 developer John Protopappas bought and renovated the building. In 2001 the Tribune moved back in, but moved out again in 2007. The building was was originally home to Breuners Furniture Store. From 1922–1959, radio station KLX 910 broadcast from the 21st and 22nd floors. 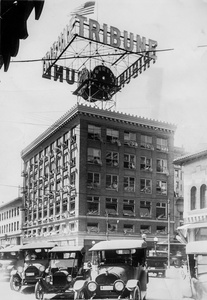 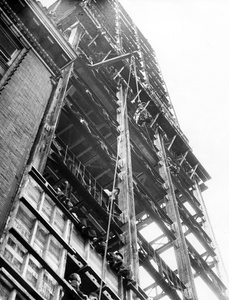 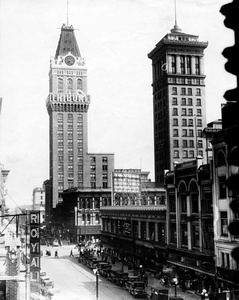 On November 14, 1915 former U. S. Congressman Joseph R. Knowland acquired the Oakland Tribune from the widow of publisher William E. Dargie. At that time the newspaper was located at Eighth and Franklin Streets in the old Golden West Hotel.

In 1918, the Breuner Furniture Company vacated its home at Thirteenth and Franklin. Knowland envisioned the vacated showroom and an adjacent warehouse as the site of a first-class newspaper facility. He began to implement this vision with the acquisition of the Breuner’s property and the move of the Tribune there.

What became the six-story base of the Tribune Tower had been designed by D. Franklin Oliver and completed in 1906. (The adjoining Tribune press room was a 1947 expansion of the old Pantages Theatre.) The now-familiar clock tower, designed by Edward T. Foulkes, was added in 1923 to complete the Tribune Tower as it appears today.

On March 30, 1918, Judge William Donahue hailed the new Tribune building as a symbol of Oakland’s progress during dedication ceremonies. 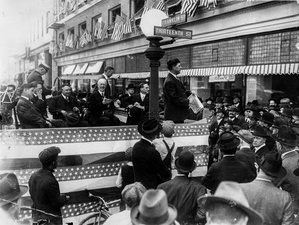 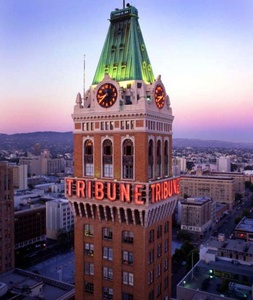 Tribune Tower at the Glow of Dusk

From 1924, the Tower would appear on the newspaper’s masthead. The top floor of the tower housed radio station KLX from its opening until the station was sold in 1959. KLX was sold to pay off debts incurred in the ill-fated 1958 run by U.S. Senator William F. Knowland, Joseph Knowland’s son, for governor of California. Joseph Knowland was a political mentor to his son, as well as to California attorney general and governor Earl Warren and many other Republicans.

The Tribune Tower gained national attention in 1923 when magician Harry Houdini demonstrated his skills by escaping from a straitjacket while dangling upside down from the ninth floor of the building. (It took him five seconds to escape.)

At various times, the building has flown a flag with the word, “THERE” emblazoned upon it. This is a send-up of Gertrude Stein’s comment that in Oakland “there is no there there.”[4]

In 1979, Gannett Company purchased the newspaper and the Tower from the Tribune Publishing Corporation. In 1983, the company sold the Tribune to its editor and publisher, Robert C. Maynard and his wife, Nancy Hicks Maynard, making them the first African-Americans to own a major metropolitan daily US newspaper.

The Tower was damaged in the 1989 Loma Prieta earthquake, which forced the Tribune to relocate to new offices in Jack London Square. The Tower sat empty until 1995, when John Protopappas purchased the Tower (and the adjoining Tribune Press Building) for $300,000. His company, Madison Park Financial Corporation, renovated the Tower in the late 1990s.  TheTribune’s parent company, ANG Newspapers (which had purchased the newspaper from the Maynards in 1992), returned the Tribune to the building after it reopened in 1999. In early 2006, Protopappas sold the Tower to Edward B. Kislinger for approximately $15 million. The Tribune moved permanently out of the Tower in 2007 and is now located as of August 30, 2012, to its current offices at 1970 Broadway in Oakland's Uptown district.

The Clock mechanisms were rebuilt in 1999 by Kevin Binkert. The clock faces were restored and repainted in the late fall of 2006. On December 22 of that year the famous TRIBUNE lettering was once again relit by the neon artist John Vincent Law  who continues to maintain the lights today. The top of the Tribune Tower is a beacon for those approaching downtown Oakland.

The building was originally meant for Zeppelin landing, the airship was to be tied off to the mast (flagpole) and the drop ladder to come down onto the 20th floor walkway. The 21st and 22nd floors also contain a water tank which held reserve water for a gravity feed to the fire suppression system in case the city water main was breached. The roof of the building is coated in bronze, giving it the green color due to oxidation. The roof features an 86-foot flagpole and a civil defense siren.

The building is a rectangular six story corner building originally designed as a furniture store in 1906, and was later converted into the Oakland Tribune office. It is connected on 13th Street to a slender rectangular 24 story office tower built in 1922, integrated with it into a unified design. The corner building is of reinforced concrete floors and curtain walls. Both buildings are clad above the first floor with variegated orange brown pressed brick with pinkish cream terra cotta, and have sheet metal and concrete trim.

Ornamentation is Renaissance / Baroque and Spanish Colonial. The tower shares the base and transitional story of the corner building, with a twelve story shaft and two story capital below a two stage, five story clock tower with a tall chateau style roof. The roof is sheathed with vertically ribbed copper, giving it a distinctive green color. The building was vacant when the Registration Form was drafted in 1998, as the Tribune had moved out in 1992, but a mixed use adaptive reuse project had been proposed.

Architecturally the 1906 Breuner's building is significant as a locally early example of reinforced concrete construction, designed by D. Franklin Oliver. The 1922 tower, designed by Edward T. Foulkes, is significant for its combination of utilitarian office design and a romantic eclectic top. The elaborate marquee over the sidewalk is one of the few surviving examples. The complex housed a major Oakland institution, the Knowland family's powerful Tribune newspaper, for three-quarters of a century. The tower, part of the 1920s wave of skyscraper construction, is a prominent visual symbol of Oakland with its distinctive shape, illuminated clock and "Tribune" sign, and may be considered the signature building of the Oakland skyline."

This historic building is #40 on the list of District Contributors for the Downtown Oakland Historic District Registration Form.

The Tribune Tower was bought by CallSocket, a call center business, in December 2011 for $8 million after it went into foreclosure a Federal Judge seized the property in 2016 accusing Tom Henderson to run a fraudolent scheme. CallSocket, owed by an entrepreneur named Tom Henderson, is conducting $3–4 million in renovations and opened the popular lunch and dinner venue,  the Tribune Tavern, on the ground floor of the building in April 2013.  The Modern Coffee cafe features  is also located on the ground floor of the building.