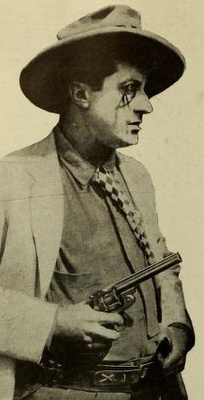 In The Further Adventures of Stingaree (1917) 1

William True Boardman (April 21, 1882 – September 28, 1918) was a silent film actor born in Oakland. He appeared in 137 films, most notably the Stingaree (1915) serial, before dying at age 36 in somewhat mysterious circumstances. Boardman began his acting career on the stage in Oakland. 1,8 Ironically, his mother was a stage actor of some note, and didn't want True to become an actor. 9

Another famous role for Boardman was in The Doctor and the Woman (1918), where his co-star was Mildred Harris, later known as Mrs. Charlie Chaplin. The film was directed by Lois Weber, the "first American woman movie director of note." 3 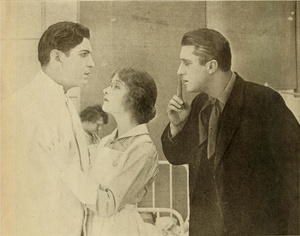 Daily Alta California 10William died of an abscessed appendix in 1886, at their home at 628 - 16th St. when True wasn't yet 4 years old. 10 William's brother Charles served as executor of his estate, which amounted to $389, including two horses. A tidy sum in 1886, but not a fortune.

The 1888 directory lists the now-widowed Carro True Boardman as a "teacher of elocution" at 1165 1/2 Washington St. and them living at The Olive (formerly Willson House), at the southwest corner of Washington and 14th streets. 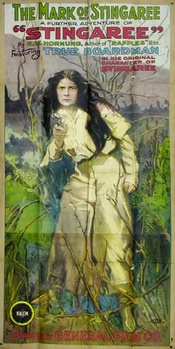 The Mark of Stingaree poster 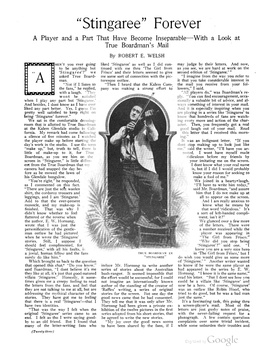 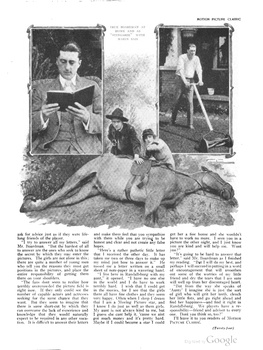 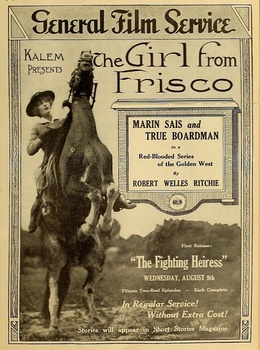 The Girl From Frisco poster

According to a 1917 article in the Oakland Tribune:

"He passed through the schools here like any other youngster would with his examination worries, his after-session fist battles and his graduations. Oakland High school records will probably show something of Boardman's early career. At an early age even before be attained attained the height of six feet solid and took on 18 pounds of muscle the youngster wanted to act. He wanted to act so hard that has parents gave in and allowed him to gather experience if naught else with the Elleford Stock, which went up and down California and Nevada during the early years of this century. It was a capable organization, and Boardman learned much.

Followed a turn with the Watson Amphion stock, another western organization, and still a new contract with Ye Liberty, his home town theater. For a time he appeared in the Belasco Central Stock, San Francisco, where melodrama reigned. He began his screen career with Selig several years ago, having tired of tramping the country. After that he signed with Essanay and lastly with the Kalem western company. There he stayed." 8

The earliest mention of his professional acting career in the Oakland Tribune is from November 1900. His mother, Carro True Boardman, was a stage actress of some note, but didn't want him to become an actor:

True Boardman has decided to go on the stage. In the past his mother, Mrs. Caro True Boardman, was one of the footlight favorites. She tried in every way to have her son follow some commercial business, but he evinced a decided preference for the stage. Young Truman has appeared in a number of theatrical performances for the benefit of charity. He sings well and dances a bit. Thus far his efforts have met with success." 9

He also spent some time doing theater work in Seattle, Washington. 1 He married Margaret in Coos Bay, Oregon, in 1909.

The first movie he is listed for on IMDb is The Rose of Old St. Augustine (1911), a short film. (In the days of silent films, the few longer films made were often serialized, too.) Over the next years, he was in numerous short films, playing a variety of parts in the Broncho Billy series, such as The Reward for Broncho Billy (1912), where he played the sheriff. The first movie where he is listed as the leading man is The Barnstormers (1915).

But Boardman began to find fame with Stingaree (1915). This series of movies was based on stories by E. W. Hornung, who also wrote the A. J. Raffles series. The movies were successful, and after seeing the first movies of the series, Hornung agreed to write more stories so they could make more movies. After Boardman appeared in some other movies, a fan wrote: "I know you are a very nice hero in The Girl From Frisco (1916) but I do wish you'd give us more of Stingaree."

Much was made of his part in The Doctor and the Woman (1918) where he plays the mysterious but beloved "K". His co-star was Mildred Harris, who later that year married Charlie Chaplin. Articles appeared all over, in newspapers, magazines and trade journals.

Boardman was at the height of his career.

True Boardman died suddenly on September 28, 1918. Wikipedia and other sources describe him as a victim of the 1918 Flu Pandemic.1 Given it killed millions of people worldwide, many of them in the prime of their lives, this seems possible. But Wikipedia and other sources all seem to rely on one newspaper article in the December 14, 1918, Reno Gazette-Journal, 5 published several months after his death.

True Boardman, who was stricken with nervous prostration several weeks ago, died at Norwalk, Cal., on September 28, and was buried in Glendale on Oct. 1, according to the rites of the B. P. O. E. of which order order he was a member.
...
The actor was reported as recovering two weeks ago, but a relapse of his trouble caused his death. Boardman was thirty-six years old and leaves a son and a wife known on the screen as Virginia Eames. 7

Most interesting is True's WWI draft card dated September 12, 1918. It gives his occupation and employer's address as "patient - State Hospital Norwalk, LA, Calif." Norwalk is a public hospital for the mentally ill, which fits with his "nervous prostration". But on the back of the card under the question about being "obviously physically disqualified. (Specify.)" is the registrar's messy handwriting: "(insane)".

Ouch. Whether the registrar was told that by staff, or made the "diagnosis" himself, it doesn't speak well to Boardman's mental state at the time. Regardless, two weeks later, Boardman was dead. 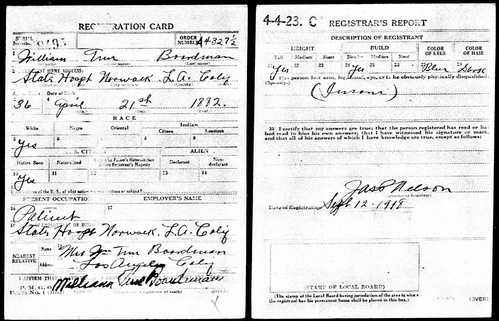 True and Virginia are buried in Forest Lawn Cemetery in Glendale, CA.

The discrepancies in the reports about Boardman's death and the relative lack of reports raise some questions:

There are all sorts of combinations of the above things which could have happened, too. For example: his mental state made him not take care of himself as well, and despite the attentions of the hospital staff, he contracted influenza and died. And places with lots of people in a small area like military camps and public hospitals were great places for disease transmission, especially for the 1918 flu pandemic.

But the lack of information makes one wonder...