The USS Potomac was originally commissioned the USCG Cutter Electra in 1934. In 1936 it was renamed the USS Potomac and served as Franklin Delano Roosevelt’s Presidential Yacht until his death in 1945.

"After FDR’s death in April 1945, the Potomac began a long and ignominious decline from her former role in world affairs. After many adventures and many owners – including Elvis Presley at one point – she was seized in 1980 in San Francisco as a front for drug smugglers - impounded at Treasure Island, she sank. The ship was raised and unceremoniously dumped on the East Bay Estuary where she sat abandoned and rotting. A week away from being sold as scrap the ship was rescued by the Port of Oakland and the process of restoration was begun."

"Since it opened to the public in the summer of 1995, more than a quarter of a million people have visited and sailed aboard former President Franklin Delano Roosevelt's beloved "Floating White House," the USS Potomac. $5 million was spent over a 12-year period to restore the 165-foot-long vessel as a memorial to the president who authored the New Deal and led the United States during the Great Depression and the World War II years." 1

On April 23, 1985 the USS Potomac was designated Oakland Landmark #LM 85-38, and is also on the National Register of Historic Places.

Dockside Tours of the Presidential Yacht Potomac are available thru January 26, 2014, 11am & 3pm

For more info and to purchase tickets: www.usspotomac.org 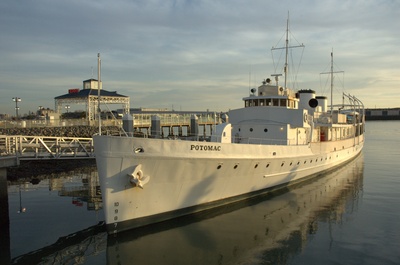 USS Potomac
photo from Our Oakland