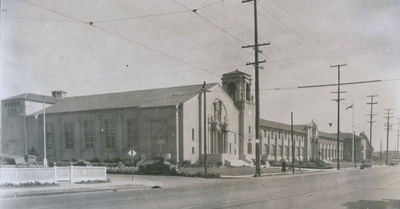 University High School, which was built in 1922 and opened in 1923, was one of the public high schools for the Oakland School District, California. The school was designed by Charles W. Dickey. The school was financed through a bond measure passed by voters in 1919.

One of the most famous graduates from University High School was 1936 Summer Olympics Gold Medal winner Archie F. Williams. After the end of WWII, the high school was closed in 1948.

The large campus gained new life as Oakland City College in 1954, before being renamed Merritt College. In 1971 Merritt College moved to its new location in the Oakland Hills. The Peralta District tried to close the former University High campus, but decided to keep it open as a college officially known as North Peralta Community College, although commonly known as Grove Street College.

For a brief period of time in the 1970s Oakland Technical High School used the campus while Tech's building on Broadway was undergoing earthquake retrofitting.

On July 19, 1994 the University High School was designated Oakland Landmark, #117, under Zoning Case #LM 90-459, and is also on the National Register of Historic Places.