Urban legends (not to be confused with Urban Legend Cellars, the Oakland winemaker, though they enter into this, too) are stories or information that spread, sometimes rapidly, but are usually false. Contemporary myths, if you will. The snopes.com website is devoted to debunking them. 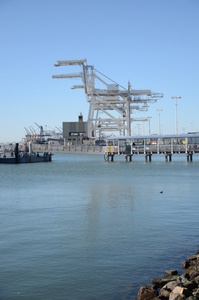 port cranes
photo CC SA-BY-NC from Our OaklandHere are some urban legends from Oakland, some are mundane, some are downright weird. And a few are true.

Not quite to the status of urban legend, there are also some well-known but wrong "facts":

Along with the urban legends, there are a number of strange-but-true events in Oakland's history: