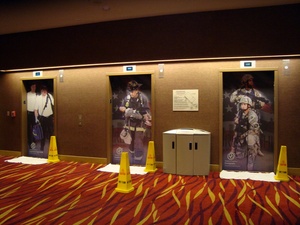 Elevator decals at the downtown Marriott during Urban Shield 2013, presumably showing some totally appropriate police gear available at the vendor show.Urban Shield is a war game police training simulation that used to take place annually in Oakland, but has moved as of 2015 to Pleasanton after former Mayor Jean Quan declined to renew the Urban Shield contract in 2014. The event is hosted by the Alameda County Sheriff's Office. In addition to the simulations, there is a vendor show where companies market high-tech weapons and gear to police from around the world. In past years this took place at the Marriott downtown.

East Bay Express says: "Every year, UASI puts on a SWAT-team training competition called Urban Shield, which attracts participants from law enforcement and first responder agencies across the US and overseas. In recent years, security forces from Israel and the Kingdom of Jordan have participated in Urban Shield. The competition consists of live-action scenarios such as hostage-holding terrorists, active gunmen, bomb threats, chemical weapons attacks, and catastrophic fires.

The 8th annual Urban Shield was held in Oakland from Sept 4 through 8, 2014 at the downtown Marriott, just south of protest central.

There was a protest rally against Urban Shield at the downtown Oakland Marriott Hotel, on Sept 5, 2014 from 4-6pm. See https://occupyoakland.org/ai1ec_event/urban-shield-protest-rally-press-conference/?instance_id=.  The protest was organized by the "Coalition Against Urban Shield", a group of about 26 anti-war and anti-poverty organizations; see http://facingteargas.org/stop-urban-shield-oakland.

There was a barbecue and march to the rally in the afternoon, 12:30pm-4:30pm. See https://occupyoakland.org/ai1ec_event/justice-james-rivera-mario-romero-andy-lopez-bbq/?instance_id=277877.

Hundreds of people came to the protest and at one point protestors blocked off Broadway between 9th and 11th. Here's a news report (includes video) and article about the protest.

The event and protest received a large amount of coverage, probably because the anti-police-militarization protests in Ferguson after the police shooting death of Michael Brown were just a few weeks prior.

Journalist @shane_bauer was live-tweeting from inside Urban Shield providing a good real-time source of info and images. Here is the article he produced that includes pictures from his tweets.

There was also some media relating to the corporate sponsors of Urban Shield, specifically Uber: "Why is “libertarian” Uber sponsoring San Francisco’s giant police militarization conference?" from Pando Daily.

On Fri. Sept. 5th, Mayor Jean Quan said in a press conference that Urban Shield wouldn't be returning to Oakland for a third year: "“The City Administrators Office will be asking our agent not to pursue another contract,” Quan said in a statement issued Friday evening." [CBS]

Oakland co-hosted Urban Shield in 2013. It cost $200,000 (personnel for planning, etc.). It appears to have been approved in April and the council was only made aware of it on Sept. 24. 2013. The expenses are supposed to be reimbursed.

On Oct. 25th, 2013, there was a protest in downtown Oakland against Urban Shield & also to commemorate the second anniversary of Occupy Oakland's eviction. There were many helicopters and a high police presence.