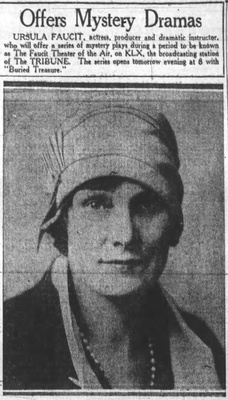 Ursula Faucit (July 10, 1890* – September 20, 1973) was an actress, producer and drama instructor. She was the head of the Faucit Theater Players, and the Faucit Theater of the Air, which broadcast dramas on KLX Radio. She also ran the Faucit School of Theatre at 1440 Harrison.
(* One source gives her birth year as 1883.)

Faucit appeared on stage in England, Australia, and other locations. In 1920 she performed with noted acting couple, E. H. Sothern and Julia Marlowe, who toured the U.S.5

She appeared in the 1928 Vitaphone Varieties "Overtones", an early talking picture from Warner Brothers. 4

Noted radio actor and KLX announcer Dudley Manlove was a member of the Faucit Theater Players. 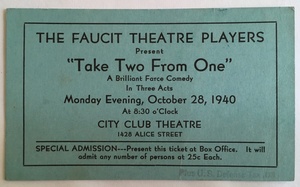 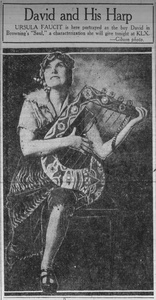