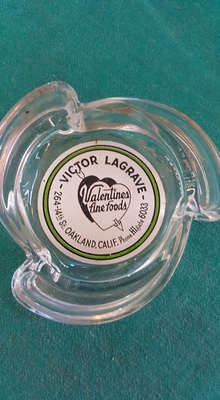 Valentine's Fine Foods was a restaurant at 262 - 14th Street, noted for its steaks. 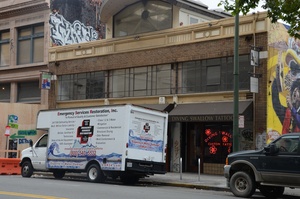 need better picture CC SA-BY Our OaklandFor many years, the restaurant was run by Victor Andrew Lagrave (October 28, 1879 – August 10, 1946) of Hayward. Lagrave was born in San Francisco, lived in Oakland for a time, but after marrying Rose (Lagrave) in 1905, they moved to 432 Castro Street in Hayward. Lagrave was also partnered with the Hellwig Meat Packing company of Hayward 3, and made his original money in cattle.

Lagrave seems to have been a kind, generous person. He came out of retirement during the Great Depression to take over the struggling restaurant.

"I can remember how the horse-drawn wagon of the Little Sisters of the Poor stopped in front of the famous 14th St. steak house every morning, and they didn't go away empty-handed. Vic loved them.

"And Vic was famous for his sense of humor, too. I can remember the time he learned that Father Wagner down at Old St. Mary's was in need of stained glass window for the chapel. Right away he offered to donate it. But then with a twinkle in his eye, he said: 'Oh, by the way, Father, I don't suppose there would be any objection if I got a little advertising out of it—say some little words down in one corner like: After mass, eat at Valentine's?' " 1

There was also the story of 'Sinbad' the sailor:

[He] walked into Valentine's one November morning in 1936 and told Lagrave he was hungry though he had no money. "Go into the kitchen and tell the cook I said to feed you," said. Vic. "No, Skipper," said the Sailor, "not unless I can work for it." And, as Vic recalled, he. was a good worker—the best dishwasher and handy-man they ever had." 2

Each spring Sinbad went back to sea, then returned to Oakland in the fall. After Sinbad died in a car accident, Lagrave was unable to give the coroner Sinbad's real name or next of kin. When Lagrave learned Sinbad was then to be buried in a "Potter's Field", he paid for a funeral and to give Sinbad a proper burial. An Episcopal minister officiated the funeral service, and Lagrave presided at the graveside:

It was a simple, unprepared ceremony. As the mourners stood about him with bowed heads he said the Lord's prayer, and "Ashes to ashes, etc." He closed by saying: "I believe we are our brother's; keepers..." 2

[ Question: any connection to Valentine Manufacturing Company of Kansas, which made pre-built diners like Golden Bell? Or is Valentine name from another source? ]