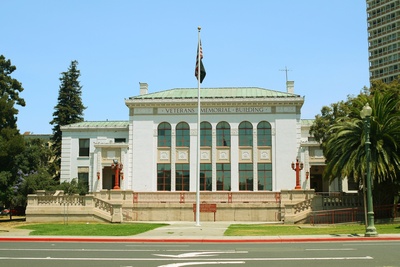 Currently, the Veterans Memorial Building is the home of the Downtown Oakland Senior Center by day, and Lake Merritt Dance during the evenings and weekends. The lawn in front of the building is the current location of the USS Maine Torpedo Port. 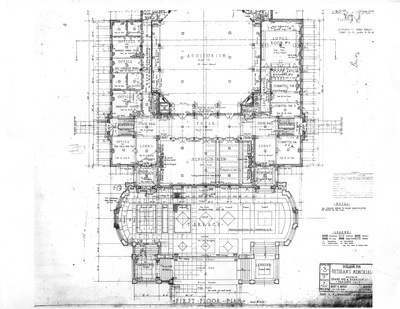 Veterans Memorial Building, architectural floor plan. (Henry H. Meyers and Mildred S. Meyers Collection, Environmental Design Archives, University of California, Berkeley)The site, located at the tip of the Glen Echo Creek arm of Lake Merritt, was given to the City by the estate of Edson Adams in 1903.

In 1924, Adams Park was chosen by the Oakland Park Board as an appropriate site for a veterans' recreational facility because of its separation from the main park. Its designation as a “monument” allowed the city to bypass restrictions that would have prevented the building of city facilities on donated park lands.