Vic's first wife, Esther, gave him the nickname Trader Vic because of his habit of trading meals and drinks for supplies and services. Bergeron did have wooden leg, but contrary to the stories he liked to tell, he was not born on a South Seas island nor did he lose the leg to a shark. His leg was amputated when he was 6 years old to save him from tuberculosis of the knee. 1 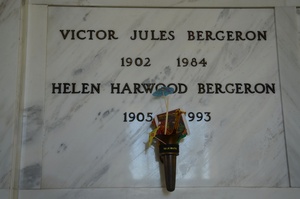 CC SA-BY Our OaklandVic died in 1984 and Helen in 1993. They are interred in Mountain View Cemetery in the Main Mausoleum (tier 357, on the lowest level).