Villa Site and Development Company was (is) a company (I believe) a real estate company that started by Frank C. Havens ( I read this somewhere, but can't locate it now).  After his death in 1918, his wife Lila Rand Havens used the company to sell off the land owned by him directly.

In December of 1937, the "in one of the largest real estate deals of the year"2 the East Bay Municipal Utility District purchased 579 acres of hill land lying between Sequoia Park (now Joaquin Miller Park) and Piedmont Pines.  The property was purchased from the Villa Site and Development Company for approximately $200,000.  Lila R Havens was noted as the President of the company. 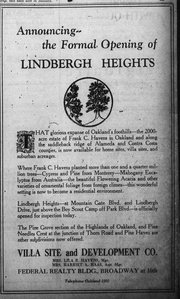