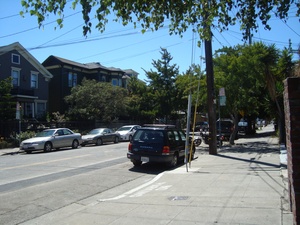 Just a regular street in the Bottoms. photo by mk30

The Village Bottoms (or Lower Bottoms or Prescott) is a historic cultural district in the predominantly African American neighborhood of West Oakland, California that overlaps (or is interchangeable with?) Prescott.

It's mostly residential with a few wide streets (like Mandela Parkway) around it. The nearest BART station is West Oakland BART.

Proximity to BART and the San Francisco freeway offramp make this neighborhood a prime site for the current influx of New Oaklanders, largely young and middle-class people who have left San Francisco due to rising rents there.  As a result, rental prices in the neighborhood for existing housing are rising steadily, and new condo/loft developments can be seen in several places.  The tension between relatively affluent new residents and existing communities shapes the lives of everyone in this neighborhood.  This once vibrant neighborhood housed an influx of blue-collar workers who came during WWII, many of them Latinx and African Americans who also contributed to a thriving music scene.  The decades following the war marked a period of economic decline for this neighborhood even as its community organizations gathered strength.  Earthquake damage from 1989, as well as the noisy and destructive introduction of the BART train and an eminent domain land grab for this, a postal facility, and various other "improvement" projects (such as the Acorn projects) contributed to the current situations of poverty, violence, and desolation. More information about this neighborhood can be found on West Oakland's main page.