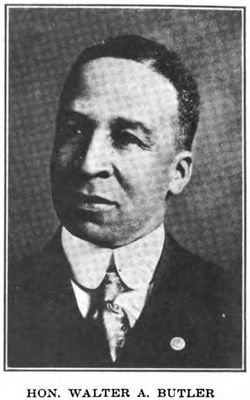 Butler was born in Baltimore, MD, the youngest of 7 sons of John and Martha Butler, who brought him to California in 1878. He attended public schools in Oakland, then entered a large law firm in San Francisco to "read law" in order to become a lawyer. After the law firm dissolved, he took a job in fire insurance. There he met his future wife, Ella Ardelle Clayton (Butler), who was the office manager at the insurance company. 1,2 Butler also worked in real estate; the 1928 directory lists him with Bay View Realty Co.

Walter and Ardelle married at Wrest-Acre in 1916, a home that Butler had constructed in 1915. 1,2 The house at 1210 Excelsior was later the home of Ida Louise Jackson, the first black school teacher in Oakland. By 1935, they had moved to 1534 Prince St. in Berkeley. 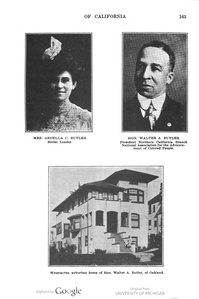