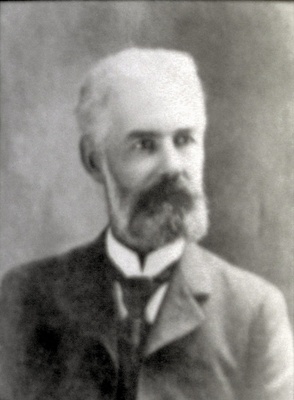 For most of his half-century-plus career, Mathews seems to have been Oakland’s go-to guy for anyone needing a mansion, church, office building or other imposing structure. To this day, for any large, shingled, turreted, gilded-age edifice you may encounter—especially if there are date palms in front!—chances are he had a hand in it somehow.

Later, I hope material will be added on his range of working styles, and maybe even go into how he influenced and was influenced by other architects and artists (including his father and brothers). For now, let’s just note that, unlike certain other local architects known for always representing strong personal tastes, Mathews, though technically meticulous, seemed content to give his clients what they wanted, being just glad to keep busy. And crazy busy he managed to stay.

A short list of his commissions over the years would have to include:

… to name a few highlights (some of which are still extant), and all but the last are or were located in Oakland. My point is that ~70 years on, Oakland still feels the man’s influence acutely (albeit indirectly, as by now many of the original works are gone).

Mathews was the oldest son of Julius Case Mathews (architect) and Pauline Mathews. His siblings were Caroline "Carrie" Mathews, Arthur F. Mathews (artist and designer), Edgar Mathews (architect) and Edwin Mathews. Mathews was born in Wisconsin, and in 1866 the family moved to California where Edgar and Edwin were born. In the 1870 census, the family was living in the town of Brooklyn; the 1900 census, Julius, Pauline and Caroline were living at 262 East 10th Street. Edgar attended Vander Naillen's School of Engineering. 1

Mathews married Viola Gates Strawbridge (Mathews) on December 24, 1879, and they had at least two children, Pauline Mathews and Hope Mathews.

Despite a love of cigars, Mathews lived to the age of 97. Following a funeral at Albert Brown Mortuary, his remains were interred in Mountain View Cemetery. 2