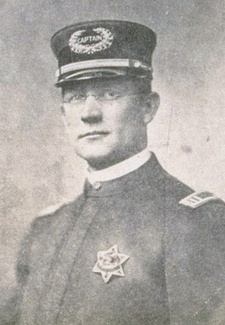 Petersen came to California as a youth, probably with his family. His father was a captain of ocean liners and came to Oakland in 1871. Petersen attended Oakland public schools until he enrolled in the California Military Academy at 13. At 16 he left school and went to sea, working for various shipping companies until 1894 including his fathers’, when he started working for the US Post Office.

Petersen married Florence B. Fisher on October 20, 1887. They had 3 kids: Ulric K., Cedric W., and Roderick Paul. The family lived at 428 Athol Avenue until Petersen moved out after an alleged affair with Mrs. Meta Makins.11

Petersen was a Mason of the Scottish Rite and a Shriner. He was a grandmaster of the Ancient Order of United Workmen and a Woodman of the World. He was a Presbyterian and a member of the Oakland Commercial Club and the Chamber of Commerce.2 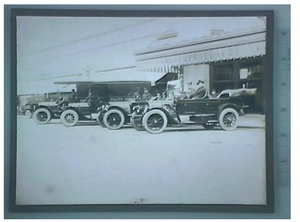 Petersen, right, drives an OPD car7In about 1898 he joined the Oakland Police Department.

In 1905, some San Francisco PD officers charged Petersen with being drunk and belligerent on the ferry. There was some doubt as to the validity of the case as, as some said the guy they saw was wearing a mustache, where Petersen had been clean-shaven for two years. Petersen was a Captain at the time.5 In 1906, Petersen was censured for speaking out about perceived corruption in the department but that didn’t stop him from speaking out again. He gave a speech at the First Presbyterian Church saying that the newest six officers were hired due, not to merit, but to political connections.12

Petersen took a leave from the department and served in the military during WWI.8 He worked as a captain of the military police.

Appointed Chief of Police in 1912 and 1916. This guy has a complicated history tied up with many of the politicians of his day!

Petersen was appointed to Chief for the first time in 1912 after Adelbert Wilson retired after 40 years of service.3 According to a history of the Oakland Police Department, Petersen was well respected by law enforcement. He was described as a “civic reformer” and worked to improve the department’s efficiency as well as to get the City Council to allocate more money to the department. He changed the police districts from three to five (something that chiefs still do now), and implemented an improved communications systems with lights over call boxes (something that chiefs wish they could do now- see Police Radios). He also organized the first Traffic Bureau with the first motorcycle units doing traffic control and had officers operate semaphores in intersections. In 1914 he instituted new uniforms, complete with new hats that replaced the old helmets. Each station got gym space for cops to get into better shape. He also instituted better arrest report standards.4

Petersen was working as Captain of Inspectors when Chief William F. Woods resigned as Chief of Police in 1916, at the request of Francis Jackson, the Commissioner who appointed Petersen back to the post. In May, he was appointed “acting chief,” and he assumed the full title (again) in September. Because of the civil service laws at the time, Petersen was placed on indefinite leave from his position as Captain. Commissioners Baccus and Anderson voted with Jackson and Mayor Davie and Commissioner Edwards voted against Petersen’s appointment. Mayor Davie had kicked Petersen out of office moments after becoming Mayor.13

In 1920, Petersen was dismissed by then-Commissioner Fred Morse because of something that happened four years before. Allegedly in 1916, Petersen had allowed Chinese lotteries to run. Petersen sued to get his job back saying that the dismissal violated the Civil Service rules. The City Council at the time backed Morse, saying that Petersen was incompetent, inefficient, insubordinate and rude. The Supreme Court ordered the City to give him his job back. However, Morse was unlikely to let this go—and it was believed he would be dismissed again for involvement in the disappearance of guns and drugs from the department.9 (If anyone understands what happened, please clarify!)6 Indeed, only six hours after reinstatement, Morse dismissed Petersen again, this time on four charges and 21 specific instances of misconduct. He was charged with disappearance of property, taking free things (gratuities—police cannot accept gifts), allowing gambling, being friends with criminals, conduct unbecoming of a police officer, and employing members of the press. Petersen fought back, saying that he would resign within two weeks but would instead run for City Council against Morse.10