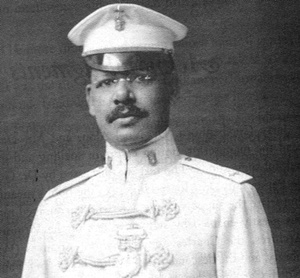 from Wikipedia 1 (fair use)Major Walter Howard Loving (December 17, 1872 – 1945) was a musician and soldier, noted for his early leadership of the Philippine Constabulary Band. In 1909, it was the first band besides the U.S. Marine Band to play for a presidential inauguration.

Loving married Edith M. McCary (Loving) in 1916, and they had one son, Walter Howard Loving, Jr. The Lovings lived at 251 Adams Street in Adams Point.

Edith Loving with visitors from Philippines 2