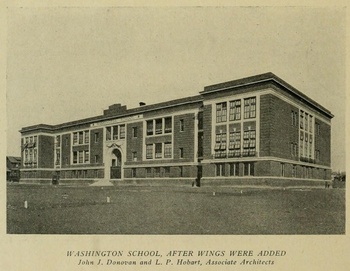 Prior to 1906, Washington School was in a small building "on Adeline near 58th". 1 A new building was constructed in 1906. According to Helen MacGregor:

"The story is that the building was completed and accepted two days before the earthquake in 1906 and was wrecked in the earthquake. So it was probably about 1907 or '08, before it was ready for occupancy. But I know we were in it at 1908 or 1909 because I have the program of the Washington School bazaar in 1909." 1

The 1906 structure was the center portion; the wings were added later. John J. Donovan and L.P. Hobart were the architects. 4

"By way of background, there has been a school at the corner of 61st and Shattuck for over a hundred years. Archival photos show the handsome old school, repaired after the 1906 earthquake, that was torn down in 1952, when the current building was constructed. " 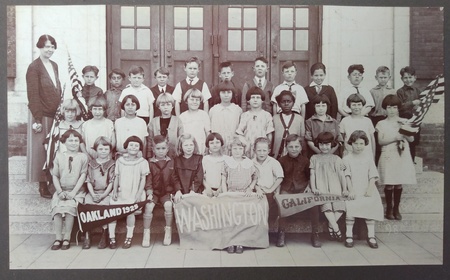 Washington Elementary was closed by Oakland Unified in June 2005 following years of declining enrollment and poor academic performance. In the fall of 2005, OUSD reopened the campus as Sankofa Academy, a new K-8 school designed to expand educational opportunities in the Bushrod neighborhood. In June 2017, the Sankofa Academy's middle school closed, making the school a TK-5 campus.