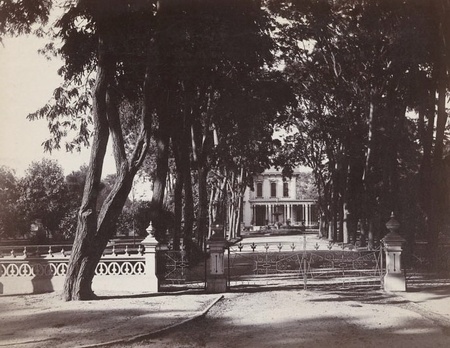 Tree lined drive of Watson A. Bray's Oak Tree Farm estate, East 14th Street, Fruitvale (date unknown) 1 Watson Augustus Bray (August 28, 1824 – January 12, 1895) was a successful grain merchant who bought over 200 acres of land that had once been a part of the Peralta Land Grant. In 1858 Bray built a beautiful estate he named Oak Tree Farm, located in the 'Fruit Vale' district of what would later become Oakland. During construction the family continued to live in San Francisco, but upon completion Bray moved his wife and infant daughter into Oak Tree Farm on January 20, 1859.

In 1857, Watson then married Julia Ann Moses (Bray) (December, 1833 – February, 1905) of New Jersey. While living in San Francisco, they had daughter Emma Bray They moved to Oak Tree Farm, and had 7 more children, including two sets of twins.

When daughter Emma became engaged to young attorney Alfred Henry Cohen, her wedding present from her parents was a seventeen room home on the Oak Tree Farm Tract across the road from her parents' home "where the asparagus patch had been", which is now better known as the Cohen-Bray House.

Watson and his brother John Grandin Bray (1814–1871) came across the continent in 1849 with a herd of cattle. They ran a grain business in Marysville in 1850, and moved it to Sacramento in 1853 1. Together they started a successful grain firm in San Francisco in 1855, Bray Brothers. John died in 1871 and Watson continued to run it until the firm ran into financial problems and failed in 1885 2. One of the causes of the failure was heavy borrowing from the firm by one of the clerks, Enos Taylor. The failure of the firm led to a number of lawsuits over property Watson had previously owned. In one case it was determined that property was given to his wife to avoid creditors. 3 In another, it was decided that property given to his daughter, Emma (namely, the Cohen-Bray House) was a gift given in good faith for her marriage. 4

Watson died in January, 1895 and Julia in February, 1905. They are buried in the Bray family plot in Mountain View Cemetery along with other members of the Bray family. 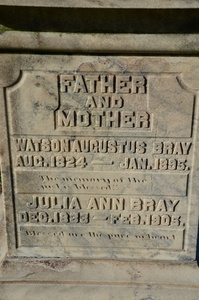 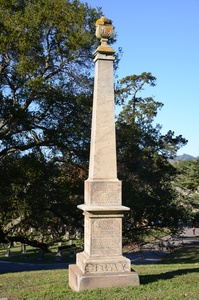